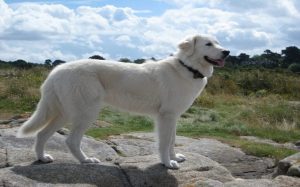 Maremma Sheepdog is a large-sized dog that was used as a guarding dog for livestock. It is also popularly known as Maremma, Maremmano, Abruzzese sheepdog, Cane da Pastore Maremmano-Abruzzese and many more.

Although it has a very similar appearance to Great Pyrenees, it is a completely different breed.

The appearance of the Maremma Sheepdog is strong, muscular with a deep chest, fluffy tail, large paws, and thick coat. It is best suited to a family that has farm and livestock. They do not do well in an apartment or small house. They thrive in an open place where they can roam around and where they have work to do.

Maremma Sheepdog was originated in Italy and has an ancient history that was mentioned in many ancient Roman paintings, sculpture, and literature. It was bred as a working dog that used to guard livestock against wolves and other predators in the mountains of Tuscany.

The United Kennel Club has registered the Maremma Sheepdog as a guarding dog.

Temperament: The temperament of the Maremma Sheepdog alert, calm, and protective. As a guarding dog, they have a natural guarding instinct. They will look after your family and the property with high alertness. They are calm and gentle with its people and fierce with predators and intruders.

Behavior: Maremma Sheepdog is an independent natured dog that likes to do things on their own. They sometimes act stubborn, so proper training is required. They need to have a job to do otherwise, they can become destructive. So, it is best suited to a family that is involved in animal husbandry.

Personality: The personality of the Maremma Sheepdog is gentle, affectionate, and hard-working. They are very loving and affectionate towards its people and are very much devoted to them. They form a very strong bond towards them and are extremely protective of them.

Training Maremman is not an easy job to do. A novice or an inexperienced owner can never train this dog. They need consistent and firm leadership that can challenge them both physically and mentally. Establish a firm leadership at an early age, otherwise, Maremman Sheepdog will take itself as a pack leader.

Train them with delicious treats and lots of vocal praises as a source of motivation. Do not be harsh on them even if they make some mistake on the training session.

Maremma Sheepdog is a gentle and loving dog that gets along with children pretty well. They need to be raised together with them from a small age. They do not do well with kids that behave harshly and roughly.

They do not tolerate harsh behavior, so teach your kids to behave around dogs and always supervise their interaction.

Maremma Sheepdog is a healthy dog breed in general. Although it can face some canine and genetic health problems.

The Maremma Sheepdog comes only in one color which is solid white.

Height: The average height of the Maremma Sheepdog is between 23.5-28.5 inches.

Weight: The average weight of the Maremma Sheepdog is between 65-100 pounds.