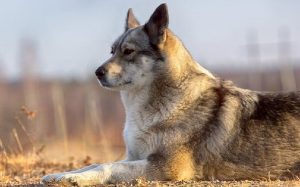 The East Siberian Laika is a medium to the large-sized dog. It is a versatile hunting dog that is also the largest of the four Russian Laika breeds. It is an energetic, territorial, and very loving dog that makes a great family companion for an active and loving family.

East Siberian Laika is a spitz-type, strong dog breed that has a muscular body that gives a close resemblance to the wolf. The eyes are oval-shaped, ears are pointed upwards giving it an alert looks. The tail is curled up over its back. Its overall appearance is powerful and alert.

The use of East Siberian Laika was declining when the hunters used dog breeds that were bred for the specific purpose like sighthound, gun dog, and scent hound. They almost became extinct but they were restored by breeding program between 1930 to 1950. Their number has been increased since then but are still considered as a rare breed.

Temperament: The temperament of the East Siberian Laika is independent, alert, and somewhat stubborn. They are friendly with the people they love and are protective of them. They are a very alert dog that is observant of the surrounding and warn their owner if there is something suspicious.

Behavior: The East Siberian Laika is a very active dog that needs a good amount of exercise regularly. If they do not get enough physical work, they become depressed, anxious, and destructive. They start to bark, chew and scratch stuff or dig the ground when they get anxious. Therefore, provide them with a good amount of regular exercise.

Personality: The personality of the East Siberian Laika is gentle, active, and fearless. They are gentle and calm when they are around the people they love. They get along with other pets in the house but they need to be raised together.

Training East Siberian Laika is not a very difficult task to does if you are an experienced dog owner that is familiar with its behavior. They are of independent nature, so can be stubborn sometimes. Train them with consistency and firmness.

Start with basic obedience training and once they master the basics, gradually enroll them to advance training. Reward them with delicious treats and a lot of vocal praises. This will keep them motivated to be focused on the training.

East Siberian Laika gets along with children very well as they are loving and playful with them. They do best with older kids who know to handle dogs and behave around them. With small kids, they need to be supervised so that there is not harsh behavior from either party. Teach your children to behave around dogs and handle them gently.

East Siberian Laika is generally a healthy breed that is prone to a few genetic and canine health problems.

The East Siberian Laika comes in the combination of the following colors:

Cost: The average cost of the East Siberian Laika puppy is between $500-$600 USD.

Height: The average height of the East Siberian Laika is between 20-26 inches.

Weight: The average weight of the East Siberian Laika is between 40-51 pounds.