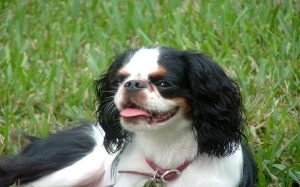 King Charles Spaniel, which is also known as the English Toy Spaniel is a small dog of the toy breed. They are a cheerful companion who likes to cuddle and be on your lap most of the day. They are very loving towards family without getting jealous and gets along with children very well.

English Toy Spaniel is well behaved, quiet, and affectionate in nature. They are playful, lively around their owners and can be very shy around strangers.

The average height of both male and female English Toy Spaniel is 10-11 inches and they weigh between 8-14 pounds. Their life span is around 10-12 years.

English Toy Spaniel was originated thousands of year ago in China and brought to Europe. It was originally bred for companionship.

King Charles II was very fond of this dog so it got its name King Charles Spaniel after him. This dog gained great popularity among a wealthy family back then where they were bought as a lap dog and a companion dog.

English Toy Spaniel adores children and can get along with them very well. They are very tolerant of children so can make a great friend with kids.

English Toy Spaniel is a fun-loving, sweet, loyal and devoted dog who loves to be around his people all the time. They have a low energy level and want to sit on people’s lap all day without doing much exercise.

King Charles Spaniel are not usually aggressive and can get with strangers well. Sometimes they can be shy but most of the time they love being around people. English Toy Spaniel are quiet and do not bark more often unless they see some unfamiliar person approaching them.

English Toy Spaniel is a bright and smart dog and has a desire to please their owners. However, they have a short attention span, so the training session should be short and interesting with treats as required.

This will help your dog focused on you and the training can go smoothly. English Toy Spaniel is mildly stubborn so using lots of praise words, keeps encouraging your dog.

Some general health problems that your English Toy Spaniel may face are luxating patella (loose knee joints), cataracts and eye diseases that can progress to blindness, heart disease that can be quite severe, dental disease and hip and elbow dysplasia. Taking your dog to your veterinarian for a frequent check-up can decrease the chance of getting these health relating problems.

English Toy Spaniel comes in mostly black and tanned in color. They also come in different other colors like red and white with a red patch on the forehead, black and white tan (Prince Charles), a tricolor consisting of a white basecoat with large black patches and tan markings over the eyes, under the tail and on the underside of the ears.

Adopting an English Toy Spaniel is much cheaper than buying them from any breeder. The cost to adopt these puppy is around 300$ in order to cover the expenses of the puppy before adopting. However, buying from breeder cost from 1000$ to 1800$ on their breeding.

The height of a grown King Spaniel is 10-11 inches. They weigh 12 pounds on average.