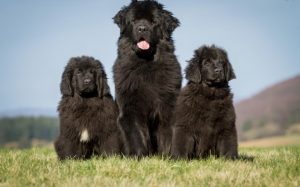 The Newfoundland is a large and strong dog breed originally bred as working dogs to help fisherman pull nets and haul wood from jungles.

The Newfoundland dogs are the breeds fond of swimming and equally strong a “pack horse”. They are sweet tempered and responsive dog breed who make a good family dog.

The Newfoundland dog breeds were originated from Canada and worked with fisherman in the region. There are three theories of how Newfoundland came into existence.

The first is that the large breed is a cross between the Tibetan Mastiff and the American Black Wolf. By mixing these two breeds the Newfoundland was developed.

Another thought is that after the New World in 1000 A.D. the Vikings left them and they were interbred and finally bred with wolves to Eastern Canada.

The third theory is that this large dog is a result of many European breeds, paired around the 15th and 16th centuries among the Pyrenean Sheepdogs, Portuguese water dogs, and Mastiff.

Is Newfoundland Safe for Kids?

Yes, the Newfoundland is safe to kids, they are easy going and friendly as long as they are properly socialized and trained. They are gentle and playful with kids but can behave differently according to the situation.

The Newfoundland is often called “nanny dogs” as they are so gentle and tolerant around kids. These dogs enjoy being around people and in a family environment having children, because of their large they can be a bit problem with toddlers so it is to observe their any interaction with small children.

The temperament of Newfoundland is a docile, sweet, patient. They are known for their kind and calm nature.

Because of their kind temperament, they have been considered as the most trustworthy dog around children of all ages. They may not be the best choice for first-time dog owners because these dogs need to be handled and trained by someone who is familiar with this type of large and intelligent dog breed.

These large dogs are not so highly energetic but at the same time like other breeds, they also require daily exercise to be consistent. They are known to be sensitive by nature and therefore care has to be taken at their puppy age because any heavy-handed treatment could be harmful to them.

Newfoundlands have a unique personality. They are too dribble and quite which can be a little difficult for owners to cope with. They love to play and to entertain and to be entertained.

The Newfoundlands are intelligent breeds and are easy to train. Like other breeds, their training and education should be started at an early age to avoid further problems. These large dogs do not respond well to harsh training and correction, but yes they do respond well to positive reinforcement training.

Facts about Newfoundland dogs are:

The Newfoundland suffers from some heriditarty problems, such as:

The Newfoundland are found in four colors

If you are adopting a Newfoundland Puppy, then adopt it from a decent breeder who raises the puppy in the home and makes sure that they are exposed to many households views, sounds, other pets, and humans.

Once you own your Newfoundland puppy continue socializing them by taking them to a new puppy kindergarten class, parks, and other public places. Make them interact with other dogs and strangers to result in a real Newfoundland breed.

Dogs Similar to Newfoundland are: