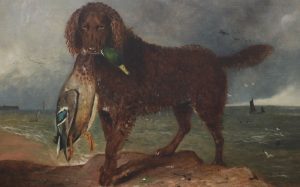 Tweed Water Spaniel was a large-sized dog breed that lived in the region of Berwick-upon-Tweed, close to the Scottish border and near the River Tweed. Ancestors believed that this breed was created by crossing the now-extinct St John’s Water Dog with the local water dogs.

The Tweed Water Spaniel dogs were generally known for their athletic swimming abilities. They had curly brown fur, a curly tail, longer snouts, along with slightly droopy lips.

The origin of the Tweed Water Spaniel dates back to the early 19th century. This breed developed after the native Scottish crossed the different types of water dogs in the region near the River Tweed. The dogs obtained from the crossbreeding were then thought to be bred with St John’s Water Dog or the modern Newfoundland Dog.

The tale of Tweed Water Spaniel’s presence was first written in a 19th century written letter by Stanley O’Neil. He said that he came to know about the breed when he encountered with the fishermen who were netting for Salmon fish.

O’Neil wrote that the fishermen were being accompanied by a dog with a curly or wavy coat. When he asked the fisherman about the dog, the fishermen told him that the dog was from Berwick, Scotland. Later, three Tweed Water Spaniels were bred which occasionally created Golden Retriever.

The Tweed Water Spaniel became extinct at the end of the 19th century. Their numbers declined as they were being excessively used to produce Golden Retrievers. Because of their wide use in the creation of the retrievers, breeders neglected to preserve the breed. Hence, those excellent water dogs totally vanished and remained in only stories.

Tweed Water Spaniel had courageous, intelligent, and loyal temperament. They were famous for their agility, sporting, and swimming abilities. They were lovable, friendly, and affectionate beings who loved going out on fishing and hikes with their owners. As they were very much attached to their masters and needed exercises, they would barely adjust home alone.

The Tweed Water Spaniel dogs were so energetic that they would assist the fishermen whole day in fishing but wouldn’t get tired easily. They were work-driven and enjoyed every moment till they had something to engage with. Otherwise, they would get bored easily.

Yes, Tweed Water Spaniel was a very child-friendly breed. They loved the affection and care that they got from the kids. They would enjoy playing with the children as long as they were having fun. But as they were large in size, it was very necessary to keep the babies in supervision as their body would easily knock the toddlers out even without such intention.

In conclusion, it was very necessary to introduce the kids and the dogs so that they would get along from the beginning.

Tweed Water Spaniel was mainly found in liver brown color while in some rare cases, they were found in brown color.

Height: The average height of Tweed Water Spaniel was somewhere around 20-24 inches (male) and 20-22 inches (female).

A mother Tweed Water Spaniel used to give birth to 3-7 puppies at a time.

Here are some dog breeds which are quite similar to the Tweed Water Spaniel:

Follow Doglime for information about other extinct dog breeds.