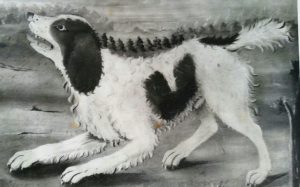 The Norfolk Spaniel is an extinct Spaniel breed that was found in the United Kingdom in the early 20th century. They were medium-sized dogs used in hunting as a gun and bird dog.

The Norfolk Spaniel had a medium-length coat and their fur spread over their chest, ears, and stomach. They had long legs and were also bigger boned and more stocky than other Spaniels.

The Norfolk Spaniel is one of the very first Spaniels to ever reside in the British Isles. Though there isn’t much-supporting evidence, it is believed that these dogs originated in the 18th century after crossing different spaniels with the Black and Tan Terrier.

How Did Norfolk Spaniel Get Extinct?

The Norfolk Spaniel became extinct at the beginning of the 20th century. The reason behind their disappearance was their use in creating the modern English Springer Spaniel. As the breeders’ prime focus became obtaining the hunting features of the Norfolk Spaniels into new breeds, they failed on preserving them.

The desire of creating the English Springer Spaniel by people increased so much that they didn’t show much priority to the Norfolk Spaniels. This led to a fall in the number of the breed by a huge margin. Also, what was left of the breed died out of old age. Therefore, they totally vanished by 1903.

The Norfolk Spaniel had a loyal, affectionate, and lovely temperament. They were so attached to their people that they would easily suffer from separation anxiety when left alone. Though they were loyal to their owners, they were also known for their stubbornness.

At times, they would become independent and totally disobedient showing signs of aggression. They would also be noisy sometimes and made noise during the hunt. Therefore, a trained professional with a lot of patience was required to train this dog.

As Norfolk Spaniel was a hunting dog, it wasn’t really considered good for families with children. Because they acted independently and showed aggressive nature sometimes, it was not an ideal option to leave the kids with them. Though they were loyal and affectionate, people really didn’t consider them for their children.

The Norfolk Spaniels were found in the following colors:

On average, a mother Norfolk Spaniel used to give birth to 4-10 puppies at a time.