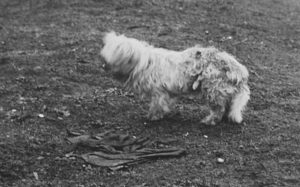 The Salish Wool Dog, also known as Comox Dog, is an extinct Spitz-type dog created by the people of Coast Salish which is now called British Columbia and Washington State.

The small-sized Salish Wool Dogs were long-haired and had dense, fluffy, and smooth fur.

The Salish Wool Dog originated in the Coast Salish (now known as Washington State and British Columbia) in the 18th century. Though they were decent at hunting, they were primarily bred for their fluffy fur and coat. They were strictly limited to gated caves and islands so that their white color and the breed remained true.

As the Salish people didn’t have sheep and it was very difficult to take wool from wild mountain goat, their fur was used to make rare and famous. Moreover, the blankets made by shearing their wool were also pretty expensive. Likewise, their fur was also mixed with feathers, plant fibers, and the wild goat wool to change the quality of yarn and produce more fiber.

How Did The Salish Wool Dog Become Extinct?

The Salish Wool Dog became extinct during the 20th century due to the increased presence of the machine-spun sheep wool brought by the European settlers along with them. Furthermore, a certain amount of these dogs declined because of the land displacement and diseases caused by settler colonization. There weren’t any new number of Salish Wool Dogs reported past 1940.

The Salish Wool Dog had a lively, loyal, and affectionate temperament. They also had trainable nature which helped them learn new tasks and commands easily. As they weren’t used for much hunting, they were used to being in houses and staying with their owners.

Yes, the Salish Wool Dog was a very child-friendly breed. Because they were trained to be perfect pet dogs, they knew how to behave with young kids. Like their modern-day Spitz predecessors, they would enjoy playing and socializing with children.

The Salish Wool Dog was found only in white color.

On average, a mother Salish Wool Dog gave birth to 2-3 puppies at a time.

Follow Doglime if you want information on other extinct dog breeds.