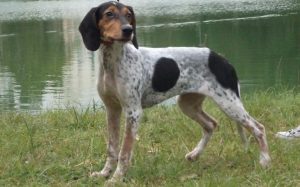 Rastreador Brasileiro was an extinct dog breed that is being recreated by breeders, so it is now considered as a rare dog breed. the name of this breed is derived from the Portuguese word “rastreador” which means tracker. Therefore, the name was given as it is a hunting dog of the scenthound type that tracks the game through the smell.

Their coat is smooth and short that is generally bicolor or tricolor. The appearance of the Rastreador Brasileiro was very similar to the Coonhound type breed. The ears were long that hang down the cheek.

The Rastreador Brasileiro was originated in Brazil. People were engaged in hunting and Brazil very much needed a dog that could help them track down the game. However, most dogs they bought were not suitable for the heat there that usually exceed 100-degree Fahrenheit. Therefore a Brazillian breeder named Oswaldo Aranha Filho decided to develop a breed in the 1950s that can survive the temperature of his country.

He began to imported American and European scenthound like American English Coonhound, Bluetick Coonhound, American Foxhound, and Black and Tan Coonhound. Then he bought the Petit Bleu de Gascogne from France with whom he crossed all the other scenthound breeds. This is how Filho became successful at breeding the Rastreador Brasileiro.

How Did Rastreador Brasileiro Extinct?

Filho wanted to popularize the Rastreador Brasileiro, so he gave the breeding stock to other different hunters who then began to breed more of their own dogs. By the beginning of the 1960s, the breeding of this dog breed became very successful. By 1967, the FCI and the Brazilia National Club fully recognized this breed.

Unfortunately, in 1973, there was an outbreak of ticks in Filho’s kennel. The ticks weaken the immune system of the dogs and spread babesiosis which is a malaria-like disease that is usually deadly. Many dogs died and to get rid of the ticks, Filho started to spray pesticides to kill the ticks but it made it worse by poisoning all the remaining dogs and lead to their death where all of his 39 dogs died.

All the breeding stock he had transferred was not found. All the other Rastreador Brasileiro throughout the country were heavily mixed with other stray dogs and there was no purebred. Therefore, both the FCI and Brazilian National Kennel Club declared the breed as extinct.

In the 2000s, people again began to show interest in Rastreador Brasileiro. So a group of people founded the Gropo de Apoio ao Resgate do Rastreador Brasileiro (GDAARDRB) to recreated and restore the breed as purebred. Their goal is to find as many breeds as they can from all around Brazil and widen the gene pool. The group is working to recreate the breed again and get recognition from the FCI and the Brazilian National Kennel Club.

These days, the group is still working to restore the breed. A few of the Rastreador Brasileiro have found their way to the United States but due to the heavy cross of the breed, it is not ideal to the standard. However, few of the minor registries in the United States have recognized this breed as a rare breed. So, we can hope the Rastreador Brasileiro soon gets restored and recognition from the major kennel clubs.

The temperament of the Rastreador Brasileiro is active, vigilant, and independent. It is not a dog that you keep as a companion due to its hunting nature. If you are involved in hunting, this breed is best for you due to their alertness, sense of smell, and loyalty.

Since the Rastreador Brasileiro is an independent nature dog, it is very necessary to establish a firm and consistent leadership upon them. If you fail to do so, they will end up being your master and training them will become hard.

Height: The average height of the Rastreador Brasileiro is between 25-27 inches.

Weight: The average weight of the Rastreador Brasileiro is between 50-60 pounds.