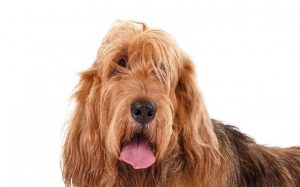 Otterhound is a large-sized dog breed bred for hunting Otters. They are best known for their shaggy coat. They are double coated with a harsh and slightly long outer coat. The inner coat is wooly and soft. It has a strong body that is fit for working even all day. The head is large and well-covered hair with dark and deeply set eyes. Their neck is powerful and the chest is deep.

Otterhound is a gentle, affectionate and loyal dog breed who makes a great family pet. It is not best suited for an apartment as they are clumsy. They need a house with an open space where they can move around without any obstacle. If you are an energetic person who loves jogging, running and swimming, Otterhound is a wonderful match for you.

Otterhound is developed in England for the hunt of the otter. Due to Otter hunting, they got the name Otterhound. They are believed to be descended from Bloodhound and some also believe that they are related to French Griffons.

In Medieval Times, when Otter started to prey on fish and started to destroy the human food, Otterhound was kept to hunt Otter and protect this valuable food source. It is so good at hunting Otter that they almost made Otter extinct, so hunting Otter was outlawed after that.

Otterhound is friendly with children and makes a good companion for them. However, due to their large size, letting them play with toddlers and small children can be risky. They do great with older children but children should be taught to behave around them as they might play rough and it can bite them.

Temperament: Otterhound is an even-tempered dog who is friendly, sweet and loving. It is an excellent hunting dog who slowly move forward towards its prey and jump right at it. It is gentle and gets along with other pets pretty well.

Small pets like cat, rabbit, and guinea pig should not be kept with Otterhound as it has a high instinct to hunt and might chase small pets around.

Behavior: Otterhound loves its family company and if it is left alone for a longer period of time, it might have separation anxiety. It will show its destructive behavior like chewing stuff and barking. Otterhound has a high barking tendency. Due to its barking habit, it may disturb the neighbor.

Personality: Otterhound has an independent personality. They do not like to be told what to do and what not to do. They love their family and if properly trained, they will obey. It needs a big space for exercise so that it remains fit and healthy.

Otterhound is an independent dog who can sometimes be quite stubborn. Due to its independent and stubborn nature, they can be hard to train. Establish firm leadership upon them. The leader should be a confident and consistent trainer. Positive methods of training by rewarding them with treats and praising them will do a trick. Do not be harsh on them while training. Be gentle and patient with them.

Otterhound can live from 10-13 years on average. The common health problems that can be seen in Otterhound are as follows:

Cost: The average cost of the Otterhound is $800-$1200 USD on average. However, price varies from the quality of breeders.