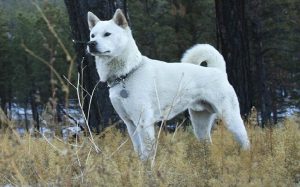 Kishu Ken is a Spitz type that was originated in the mountainous region of Kyushu on the southernmost island of Japan. It is originally bred as a hunting dog to hunt wild boar, deer, and bear.

They are a medium-sized, strong dog with high hunting ability. Kishu Ken is similar to the Shiba Inu, Akita Inu, and Ainu Dog. It is assigned as a national treasure in Japan in 1934 and since then it has been protected by the law.

Kishu Ken is a faithful, loyal, docile, noble, and intelligent dog. They are very faithful and loyal towards their family and more towards one particular person than the whole family. They get well with children if raise together from an early age. However, they will not get along well with other pets as they are dominant in nature and see themselves as a pack leader.

Kishu Ken is an intelligent and smart dog that can learn things quickly and easily. However, they are an independent dog that is dominant and see themselves as a pack leader (family). They like to do things on their own and also want others to do things on their way. So one should be experienced and know the nature of the dogs to own a Kishu Ken.

When to Start Training?

Kishu Ken is a very smart dog and its training should be done at an early age when it is eager to please its master. They are able to catch things quickly in their puppy-hood. Therefore, the age between 6-8 weeks is the best time to train your Kishu Ken.

Advanced training should be started as soon as they complete learning basic training. The suitable time for start advance training is at the age of 12-14 months.

Where to Start Training?

Kishu Ken needs an open space to train. Train them in a back yard of the house or in a dog’s park or playground. Keep them on a leash as they might get aggressive if there is the presence of other dogs. Training them in a small area or a room is not a good idea. They will need a big area where they can run, and play.

How to Define Task for Your Kishu Ken?

Defining a task for Kishu Ken is very easy. Teach them words like sit, stand, come, eat, stop, etc for a certain job. One word should be taught for one job as a variety of words for the same job might confuse them and they will not be able to understand.

Use hand gestures to make them under what you are assigning them to do. They will learn even more quickly if you do the task with them and show them how it’s done.

Training Kishu Ken is not an easy job to do, at least not for a novice owner. They are independent and sometimes can become stubborn. You need to be an experienced owner who knows the behavior of the Kishu Ken. They see themselves as a leader and don’t want anyone to take their position. Therefore, the following methods and technique should be followed while training your Kishu Ken:

Leadership: Establish a firm leadership is must upon Kishu Ken. You should show them who the pack leader and who they should respect and follow. To develop a leadership position upon them, you need to be a confident and consistent owner. Then only they will be able to see you as their owner.

Positive methods: Positive Methods of training means providing them something which can help them remain motivated while training. Reward them with treats after they finish a task with a gentle pat on their back. Use lots of vocal praises as they learn a new task which will keep them motivated and encouraged.

Keshu Ken should be treated gently while training as they are a sensitive dog. Do not be harsh on them and train them with patience. Learn Kishu Ken’s behavior and body language so that you know when it wants something. enroll them in agility training for their mental stimulation.