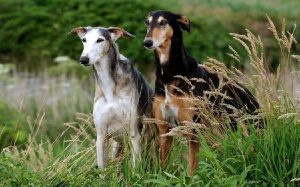 Polish Greyhound is a large-sized dog breed that is a member of the sighthound group. Like the other sighthounds, it has a slender and very lean body. Their chest ribs are clearly visible and it is not due to poor eating. Their body is made that way and feeding them more can only lead to serious health problems.

Polish Greyhound is also popularly known as Chart Polski. It is not recommended to a novice owner as it is a sensitive dog with sensitive body parts. They do well in a house with an active dog owner as they are active and thrives on when they have activities to do.

The Polish Greyhound was originated in Poland whose ancestors were Asian Greyhounds. It was used as a hunting dog that used to hunt hare, fox, and even wolf. They were not only famous among the magnate residences but also among the nobilities. This breed nearly got extinct in the 19th century but its admirer began to protect this breed and again came in good number around the 1980s.

Polish Greyhound is not yet recognized by the American Kennel Club. However, the United Kennel Club and Fédération Cynologique Internationale has recognized this breed as a member of the sighthound group.

Temperament: The temperament of the Polish Greyhound is quite different from most of the sighthound. It is very protective of its territory and of the people it loves, unlike other sighthounds that are mild-tempered and gentle. Due to their protective instinct, Polish Greyhound makes an excellent family companion.

Personality: The personality of the Polish Greyhound is affectionate, devoted, and stubborn sometimes. They form a strong bond to one person of the family and are very devoted to. They have a mind of their own, so stubbornness might hit them sometime. Only an experienced dog owner can handle its personality well.

The Polish Greyhound is good with children as they are tolerant of kids rough behavior than most of the other sighthound. They love to play with them and be by their side looking after them. Although they are good with children, they should be supervised around small kids and toddlers. Also, teach your kids to behave around them.

Polish Greyhound needs to be trained by an experienced dog owner who knows its temperament. They do not like being told what to do and what not to do, so a firm training with consistent leadership is necessary. Start training them from a very early age when they are eager to please their owner. As a source of motivation, reward them with delicious treats and lots of vocal praises.

The Polish Greyhound can face some genetic health problem or other canine health issues.

The average height of the Polish Greyhound is between 59-69 pounds and the average weight is between 27-31 inches.