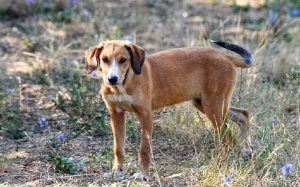 Posavac Hound is a hunting dog which is known as Posavski Gonič in its native land that means ‘Scenthound From The Sava Valley’. It looks stretched version of the Beagle with large, floppy ears. This dog breed may be new to many but once they get to know about its nature and skills, they will fall in love with its loyal, loving, and gentle disposition.

The Posavac Hound has a strong physique with a round, deep chest. They have large floppy ears, short coat, long tail. The muzzle is quite long, the forehead is broad and the eyes are large that gives an intelligent expression. Their whole face gives a gentle and sweet expression.

Posavac Hound was originated in Croatia as a scenthound that was used for hunting fox, hare, and other small game. Although there is no actual proof from when this breed was around but the modern breed resembles images seen in frescoes that date back to the 16th century. In the 1800s, the hounds from the Sava Valley were sold to Croatia as ‘Boskini’.

Temperament: The temperament of the Posavac Hound is docile, lively, sweet, and affectionate. They are an active dog breed that needs regular physical exercise and mental stimulation. They are a fun companion that gets along well with family members as well as other dogs in the house.

Behavior: Posavac Hound has a high prey drive which is why they are not suited in a house with small animals like rats. They are active dog but they do not require vigorous exercise. A good bit of exercise regularly will keep them happy and content.

Personality: The personality of the Posavac Hound is friendly, loving, and devoted. They love to spend time with their people and are very devoted to them. They do not do the best in an apartment and need a house with a yard. Posavac Hound is suitable in the countryside than in the cities.

Training Posavac Hound is not a tough job as they are smart and intelligent. A novice owner cannot train them and they need an experienced dog owner that can train them with firmness and consistency. They are a pack-minded dog, so establishing a leadership upon them from an early age is necessary.

Use positive reinforcement as a method of training. Reward them with delicious treats and lots of vocal praises to keep them motivated and encouraged.

Posavac Hound gets along with children very well as they are playful, gentle, and loving dogs. They are gentle with small kids but due to their high energy, it can be too much for small kids. Therefore close supervision is necessary whenever they are interacting with each other.

Height: The average height of the Posavac Hound is between 17-23 inches.

Weight: The average weight of the Posavac Hound is between 35-45 pounds.