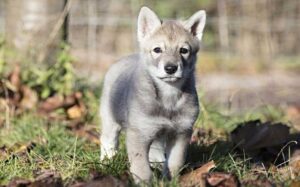 The Saarloos Wolfdog is a large-sized dog breed that very much resembles the wolf because of the way it looks. Although it has a face like a wolf, it is known as a loving and gentle breed in a house with an experienced dog owner. It is not at all suited for apartment life or for a novice dog owner.

Saarloos Wolfdog can give birth to 6-8 puppies at a time. The development process of these puppies are slow compared to the small-sized dog breed.

When the Saarloos Wolfdog’s puppies are born, they are completely blind, deaf, toothless, and unable to walk. Although they are not born hairless and are fully furred. The mother takes care of her puppies during this critical stage where she nurses and cleans them. She also does not leave the puppies alone for some time unless she has to pee or have a meal.

The neonatal stage is up to two weeks of the Saarloos Wolfdog’s puppy birth. During this, the only activities that the puppies do are eat, sleep, and come crawling. They need a good amount of energy to grow at this stage, so around 90% of sleep in a day is required. In the second week, the puppies become double the size of their birth.

Only mother’s milk should be fed during this period as it contains colostrum which helps to keep the puppies fight many fatal diseases. Since their teeth have not grown yet, do not feed any solid food to them. Due to crawling using their front feet, their forelegs start to become stronger.

The transitional stage is one of the important stages for the Saarloos Wolfdog puppies as the physical changes can be seen in them. The eyes and ears start to open in 14-18 days and by 23 days, you can see the puppy slowly standing up on its feet. This is a period where the puppies start to interact with each other for the first time.

The puppies also start forming their own vocabulary to communicate with each other by whining, yelping, barking, and other different sounds. The baby’s teeth also start to grow and they start to sample solid food from the plate of their mother. Now the puppies have learned to become more independent. They also have control over their bladder and go away from the nesting area to pee and poop.

In the socialization stage, the Saarloos Wolfdog puppy forms a connection that lasts for a lifetime. So, their interaction with people and dogs should be done carefully. In the first half of this period, the puppies spend with their family getting to know the environment and its people. It is also the perfect time to start giving them basic training. When the puppies get around 10 weeks old, take them out to introduce them to the outside world.

While taking the Saarloos Wolfdog puppies out to make them interact with people and dogs, make sure you keep them on a leash. They are also in a phase where they are mostly scared, so be gentle and do not force them or make them overwhelmed by taking them to a crowded place. Introduce them to various people and dogs slowly. It will make them become more comfortable around them and not aggressive.

In this period the Saarloos Wolfdog puppies have grown to look more like an adult. They are full of energy and curiosity at this age, so it is important that you make them utilize their energy. Teach them different tricks and games which help to stimulate their mind. Also, continue their training and socialization for some weeks till they master it.

It is also the right time that you establish yourself as their leader or alpha of the pack. If you fail to do so, your dog will take themselves as the leader and training them becomes tough.

Feed your Saarloos Wolfdog puppies puppy food that has all the nutrition needed for them. Always keep a clean and fresh water by their side so the puppies are hydrated anytime.

In the adolescence stage, the male Saarloos Wolfdog starts marking up the area with their urine while the female experience her first heat. The males start showing interest in the female pup and their testosterone level also increases till they are 10-12 months old and slowly falls after that. However, breeding at such a young age is not advised as it might affect the health of both the male and female pups.

Switch the puppy food to the adult food that is of high-quality with all the nutritional needs. Involve the in agility and other dog’s sports that keeps them active and mentally stimulated.

Vaccination Cost for the Saarloos Wolfdog