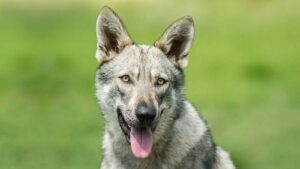 The Saarloos Wolfdog is a wolf-like dog breed that was bred by crossing the German Shepherd and the Eurasian Grey Wolf. It is a powerful dog with a broad head, powerful neck, long and strong legs. The tail is long and feathered which is set low.

This breed is not for any novice owner or in a family with small kids. They need a strong leader that can build an alpha relationship with it. With proper love and training, this bred makes an excellent family dog, watchdog, and great companion for hiking.

However, the attempt to make the Eurasian Grey Wolf hardy, defensive with wolf-like traits failed and it became aloof and reserved. It was recognized by the United Kennel Club (UKC) in 2006, July 1.

The Saarloos Wolfdog does not do well in a family with kids. However, if they are raised with them and are trained and supervised, this breed makes an excellent companion for children. With kids outside the home, they can be wary, so close supervision is needed when letting them interact with kids.

Temperament: The temperament of the Saarloos Wolfdog is aloof, reserved, and independent. They are quite reserved and wary of strangers which makes them a great watchdog. However, proper socialization from an early age is necessary so they do not become aggressive towards any people passing by.

Behavior: The Saarloos Wolfdog is shy, quiet, and has a prey drive. You can see them being shy around new people and also suspicious about them. So a proper soializaation is needed from small age. Some of this dog also have a prey drive which can lead to hurting small animals. So they should be kept ina fenced yard and should be taken out only on a leash.

Personality: The personality of the Saarloos Wolfdog is independent, affectionate, and gentle. They love being around family and engage in various activities with them. They are also gentle and loving if raised with a gentle hand and in a good environment.

The Saarloos Wolfdog is a very smart dog breed so training is not difficult as long as you introduce yourself as the alpha when they are still a puppy. This breed is very independent, so if they do not see you as the leader, they might become one and training becomes hard.

Training should be challenging and fun for Saarloos Wolfdog as they get bored easily. Enroll them in agility, dogs sports and many more activities to stimulate their mind and keep them active.

Hip Dysplasia: It is a condition where the hip bone of the dog is developed abnormally. It is usually hereditary issue that can affect your dog in their normal walking and running. The treatment of this health problem is not always possible, so before brining a Saarloos Wolfdog puppy home, check for the health problems of its parents.

Progressive Retinal Atrophy: It is an eye related problem that is caused by defective gene of the parents. It affects the eyes and can even cause blindness. It is not quiet treatable so before bring your puppy home, ask for the health history of its parents.

The Saarloos Wolfdog comes in the following colors:

Price of a Saarloos Wolfdog’s Puppy