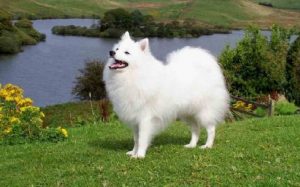 The Japanese Spitz is a small-sized dog breed that makes a great companion dog. It has a very similar appearance to the American Eskimo and also looks a smaller version of the Samoyed.

It has its own unique appearance with a strong, compact frame that is covered with a thick, white coat. They have a deep chest, short muzzle, and a thick ruff around the neck.

Japanese Spitz is suited for a novice owner as well but they need to be an active dog owner. Although they are suitable for apartment life too, they also need lots of outdoor activities. Only an owner who can invest their time with their dog and are involved in outdoor physical activities should own a Japanese Spitz.

Japanese Spitz was originated in Japan, Tokyo. The full history is unknown due to the wasted of the records after World War II. However, they are believed to be descended from the Samoyed, American Eskimo, and the White German Shepherd.

It was first recognized bt the Japan Kennel Club then the Japanese Spitz was exported to Sweden, England, and slowly all around the world.

Temperament: The temperament of the Japanese Spitz is playful, funny, happy, and active. They are a small, energetic dog breed that is very playful and funny making a great family companion. They will not let you get bored and entertain you with their silly acts.

Behavior: Japanese Spitz thrives on the love and attention of its family. They need to be with their people most of the time as the are a very sociable dog that enjoys human company. So, do not leave them alone for a long period of time as they can get depressed.

Personality: The personality of the Japanese Spitz is loyal, smart, playful. They are very devoted to their family and a bond strongly with each member of the family. They are loving, smart, and spirited dogs which makes them an excellent choice for a family.

Japanese Spitz is a very intelligent dog breed that is easy to train for an experienced dog owner. They are quick at learning new instructions and commands. They need a consistent leader and respond well to a positive method of training. Reward them with treats and lots of vocal praises as a source of motivation.

Japanese Spitz is very friendly and playful with children. Therefore, they do great in a family with kids due to their loving and playful nature. They adore children and love to spend time with them playing. Although elderly supervision is always necessary whenever they both are interacting as to avoid any kind of harsh behavior from either party.

Japanese Spitz has a few of the following health problems that they face during their lifetime:

Height: The average height of the Japanese Spitz is between 12-25 inches.

Weight: The average weight of the Japanese Spitz is between 10-25 pounds.