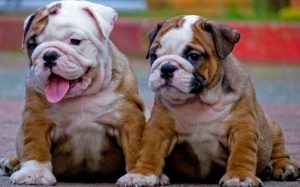 The Toy Bulldog is an extinct bulldog breed that lived in England in the 18th and 19th centuries. It was a toy-sized bulldog and was used as a companion dog.

Just like its name, the Toy Bulldog had a small body with muscular and stocky legs. They had short coats, wrinkled or loose skin, and most of their tails used to be circular-shaped or had just a nub.

The Toy Bulldogs were originated in England in the 18th century by crossing Bulldogs with Pugs and/or their offsprings. The motive of creating this breed had two different directions. The first one was that people wanted to downgrade the Bulldog in terms of size. Moreover, the other motive was to bring the features of bulldogs in small dogs.

Both motives of the breeders failed as they obtained regular-sized, unhealthy, and infertile dogs from the crossings. In the 19th century, bulldogs became surprisingly popular as companion dogs. However, people preferred their furry pets to be smaller. So, they crossed the bulldogs with small breeds like Pugs or Terriers after which the Toy Bulldog was achieved.

Not only did the breed live in England, but it also reached and gained popularity in France as well. Some even believe that it was transferred to America where it began to be known as Boston Terrier although no proofs are ever shown.

How Did The Toy Bulldog Got Extinct?

The Toy Bulldog got extinct in the early 20th century because of the lack of prevention measures. As their fame started increasing in France, a huge number of these dogs were imported from Britain. This decreased their population in Britain and the breed started becoming rare. Moreover, people also didn’t consider them to fit the Bulldog standard. After that, nobody really cared for these dogs and they vanished by 1925.

The Toy Bulldog had lovely, friendly, and affectionate temperament. They were so intelligent that they could be trained easily. They were gentle and social dogs that would behave with humans very softly. As they were famous for having a quirky personality, they could entertain their family very much.

Was Toy Bulldog A Child-Friendly Breed?

Yes, the Toy Bulldog was very child-friendly as they enjoyed and loved playing with children. As they thrived in attention, they would get along with kids of all ages very quickly. If raised together from an early age, the dogs would also become protective of their little pals. Therefore, these dogs were perfectly fit for families with children.

The Toy Bulldog was found in the following colors:

On average, a mother Toy Bulldog used to give birth to 3-5 puppies at a time.

Follow Doglime if you want more information on other extinct dog breeds.