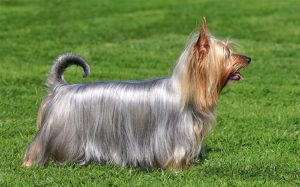 The Silky Terrier is a small lap dog which is also known by the name, Sidney Silky Terrier, Australian Silky Terrier, and Silky Toy Terrier. As in its name, it has a long fine and silky hair that flows beautifully from head and body. It is most suited as a lap dog that thrives for human company. They are suitable for apartments as it does not need a big area for vigorous exercise.

The Silky Terrier is a small-sized dog breed which has a toy-like appearance. The head is wedge-shaped and fairly long with a dark, small, keen eyes. Their ears are high set, small, and erect. The body is low set and their legs are short which is not proportionate to the body size.

Silky Terrier is a curious and lively little dog, that makes a great companion for a family that is looking for a lap dog.

The origin of the Silky Terrier is in Australia towards the end of the 19th century. It was developed by crossing two breeds: Australian Terrier and Yorkshire Terrier.

The Silky Terrier was strictly bred as a companion dog who was not regularly involved in vermin or rat hunting, unlike other terriers. However, it can be involved in hunting and it is believed to be good at it.

The Australian National Kennel Club was founded in 1958. Silky Terrier was seen in America when American serviceman and women returned from Australia after World War II. The American Kennel Club accepted this breed as a member of the Toy Group in 1959.

The Silky Terrier is a great family companion and also do well in a family with children. They are playful and fun who can play with children making a great playmate. However, they do not tolerate harshness, if done so, they might even bite.

Younger children should be supervised when they interact with the Silky Terrier as small kids tend to pull and pinch. Therefore, children above 10 years of age do well with Silky Terrier.

Temperament: The temperament of the Silky Terrier is friendly, alert, and spirited. They are so full of energy and thrives for the company of people. It is a very active dog that likes to be involved in the daily activities of the house. So, take them out with you while running, jogging or just while taking a stroll.

Behavior: The Silky Terrier thrives for human company and if they are left alone without any human interaction, they tend to get separation anxiety. Due to which they will show destructive behavior by barking constantly and biting stuff. Therefore, they should not be left alone for a long period of time on their own.

Personality: The personality of the Silky Terrier is intelligent and confident. They are very quick at learning new stuff but due to their stubbornness, they do not tend to follow it easily. They are affectionate towards its family and form a strong bond with them.

Training the Silky Terrier is a challenging task to do as they are stubborn and are bosses of their own. Training should be started at an early age when they are more eager to please you.

Start with basic obedience training at an early age and slowly move to advance as they learn basic training. Rewarding them with delicious treats will help a lot as they are quick to respond to positive methods of training. However, do not force them on learning stuff as they might become afraid and defensive. develop a firm leadership and gently teach them.

The Silky Terrier comes in the following colors:

Cost: the average cost of the Silky Terrier puppy is between $600-$800 USD. However, if you consider adopting, it will cost somewhere around $300. In this way, a puppy will get a home and a family.

Height and Size: The average height of the Silky Terrier is between 8-10 inches whereas, the average weight is around 10 pounds.