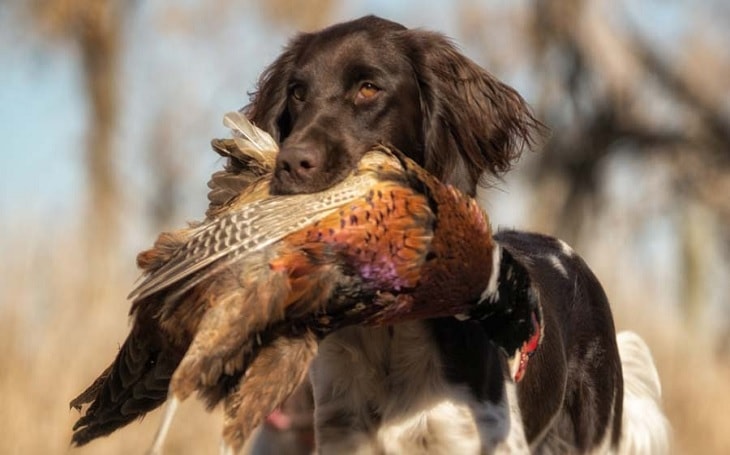 Small Munsterlander Dog is a natural hunting dog that is excellent at their hunting job. They have the ability to hunt both on land and water. If it is not working, then it is known to be a great house pet and an excellent companion for the family.

As a hunting dog, it is obvious that they are very active. Therefore, any dog owner living in an apartment should get the idea out to own Small Munsterlander. They need a yard or a space big enough to perform their regular activities.

Small Munsterlander is a medium-sized, lean and strong dog. Its muzzle is long and powerful. The ears are big, hanging on the side of the cheeks. It very much looks similar to Large Munsterlander in term of appearance but these two breeds have completely different ancestry.

The Small Munsterlander was originated in Germany and believed to be developed in the middle of the 19th century. It was developed by crossbreeding German Longhaired Pointer and longhaired spaniels that are known as Wachtelhunds.

It was bred as a hunting dog that hunts following its instincts, rather than based on the training. Small Munsterlander used to point out the shotted animals by following the scent of the wound and point out the game to the hunters.

The Small Munsterlander nearly disappear in World War I like many other breeds, but it was revived in its homeland and the number gradually increased.

It was recognized by the United Kennel Club in 2006. The American Kennel Club has kept this breed in the Foundation Stock Service (as of April 2019) since 2006.

Small Munsterlander is very child-friendly and get along with them very well. They are tolerant of children and even small kids or toddlers. It does not mind their pulling and biting as they are loving and very gentle towards the kids.

The interaction with unfamiliar children should be supervised properly. Kids also should be taught to approach dogs and behave around them, no matter how tolerant a dog is.

Temperament: The Small Munsterlander has a happy, fun, and active temperament. They are very friendly with people and even with strangers. They greet them and welcome them by wagging their and licking them. However, if they sense any odd behavior, they tend to bark at them warning their owner. Therefore, are also taken as a good watchdog.

Behavior: As a hunting dog, Small Munsterlander requires a good amount of exercise. If they do not get the required exercise, they become anxious and sometimes even destructive by barking loudly, chewing on stuff, and scratching floors. Therefore, in order to avoid their destructive behavior and also to keep them fit a good amount of exercises should be provided to them.

Personality: The Small Munsterlander has a self-confident and adaptable personality as it can easily get along with a changing environment. However, changing the environment does not mean a closed place like an apartment where they cannot do their regular exercise needed. They are affectionate and very loving of their family, which makes them a great family pet.

Training Small Munsterlander is not a hard job to do as long as they are provided with gentle and consistent training. They are very smart, intelligent and are eager to please their owner. To keep them focused and to keep them motivated in the training, reward them with treats and a lot of vocal praises.

Do not be harsh on them while training by beating and using harsh words. They get scared and sometimes even aggressive due to which they could not concentrate on the training. Be loving and gentle towards them even if they make some mistake.

Small Musterlander is generally a healthy breed with a life expectancy of 12-14 years. Between these ears, they might suffer from the following canine diseases:

The Small Munsterlander comes in following colors and markings according to American Kennel Club:

Cost: The average cost of the Small Munsterlander puppy is between $800-$1000 USD. However, if you consider adopting, it will cost a lot lesser which is around $300. All the expenses of taking care of the puppy are included in the adoption cost.