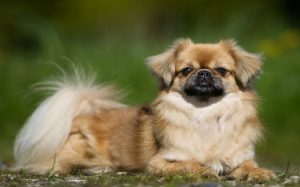 The Tibetan Spaniel which is also nicknamed as Tibbies is a small dog breed of Asia. At first glance, they somewhat look similar to Pekingese. It is a non-sporting group dog that does not have a high activity level.

This dog is suitable in an apartment due to its small size and also a low activity level. Just a few minutes of walk regularly is enough for this dog to fulfill its required activity.

The Tibetan Spaniel has blunt looks and the monks have given them a name “the small lion”. The head is small than the body with eyes oval, expressive and the ears are set high, pendant, and fully feathered in adults. The neck is slightly short and strong. Their coat is double with dense and medium outer coat and soft and short undercoat.

The origin of the Tibetan Spaniel was in Tibet and is believed to be a very ancient breed that dates back to some 2000 years. The Buddhist monks bred this breed as to serve as an alarm dog. If they see anything suspicious, they would bark and warn the monks about the activities in the area.

These Spaniels were valued very much and were presented in front of royal families as a gift. This breed got attention in the United States in the 1960s and became quite popular at that time.

In 1971, the Tibetan Spaniel Club was formed. It was first introduced in England in the late 1800s. In 1984, the American Kennel Club recognized this breed as a member of the non-sporting group.

The Tibetan Spaniel does great with a family with children as they are loving and protective of them. However, they do not get along with the kids they don’t know.

While taking them out of the house in the place with children, keep them on a leash. Due to their small size, big kids might knock over them and injure them. Therefore, their interaction should be properly supervised and taken care of.

Temperament: The temperament of the Tibetan Spaniel is bright, playful, and, self-confident. They are not much an active dog, so a moderately active dog owner is suitable for it. They enjoy exercise but not for a long time. It is happy with family and sitting by their side or just laying on their feet.

Behavior: Tibetan Spaniel is a small dog but it does not like people carrying them. They like to walk than being carried but walk them on a leash. It does not like being left alone for a long time without a family companion. If it happens, it will bark excessively disturbing the neighbor and chewing on stuff.

Personality: The Tibetan Spaniel has a willful and intelligent personality. They are smart and quick at learning commands and new things. They seek attention from people, so they are best suited for older people who have the time to place all attention on them.

The Tibetan Spaniel makes an excellent companion at a house where people stays home and work.

Training Tibetan Spaniel is not an easy task to do. You must establish a firm leadership from an early age. Forming a leadership at an early age is necessary because once it sees itself as a leader, training is quite impossible. A lot of delicious treats is a great motivation for them.

Treat them and train them gently as harsh treatment might lead to their aggression. Start with basic commands and once they master it, slowly jump to advance training like agility.

The average life span of the Tibetan Spaniel is between 12-15 years. In this years they might suffer from the following canine diseases:

The Tibetan Spaniel comes in the following colors and markings according to the American Kennel Club:

Height and Size: The average height of the Tibetan Spaniel is around 10 inches. The average weight is between 9-15 pounds.

Cost: The average cost of the Tibetan Spaniel is between $800-$1000 USD. The cost might varies with the quality of the breeders.