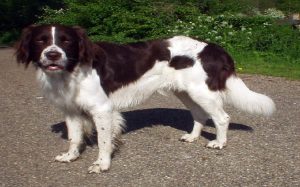 The Drentse Patrijshond is a dog breed is from the Netherlands. Although it is a very old gundog breed, it was not granted formal recognition until the 1940s. This modern dog breed is normally a gundog and companion animal.

Drentsche Patrijshond breed got its recognition in the Dutch kennel club in 1943. American kennel club recognized it only in 2010. The dog is known for its agility and sensitiveness for prey scents.

Yes, Drentse Patrijshond dogs are child-friendly and are loyal to families and children However, children they don’t know maybe more of a challenge and should always be supervised. The dogs should be trained on how to interact with animals to avoid incidents. Socializing and training them help to interact them to children and strangers.

As with every breed, teach children how to approach and touch dogs and always supervise any interactions between the dogs and children to prevent any biting or ear pulling or tail pulling. Teach your child never to approach any dog while he is eating or sleeping. No dogs should be left unsupervised with children.

Drentsche Patrijshond becomes ferocious hunter at the hunting spot and transforms itself into a peaceful breed at home. This sweet temperament of this breed is commendable. This breed has strong prey drive for birds. With children, they are lively and easily woo them. They are also caring for their family members.

Daily physical and mental simulation makes the dog life harmonious at home. Drentsche Patrijshond is the best running and jogging companion as they crave for running in an open apartment. They love to go on an adventurous ride with their owners.

It is very important to start training the Drentse Patrijshond puppy as soon as he comes to ensure a well behaved adult dog later. It is integral not to wait for six months to start training as this might make it impossible to train your dog.

Drentsche Patrijshond dogs are natural hunters so you do not need to do much to train the dog. Their high intelligence makes them easy to train. You need to be gentle in teaching them socialization. An  oriented training program that includes food is best for them. You can also train this dog in other activities like search and rescue operations.

Some of the facts related to Drentse Patrijshond dogs are as follows:

Drentse Patrijshond dogs breed are healthy but like all other breeds, they are prone to certain health issues. They are:

Drentse Patrijshond dogs have height of 55 to 63 cm and weigh about 48-73 pounds in average.

Which dogs breed are they similar to?

Some of the breeds similar to Drentse Patrijshond dogs are as follows: