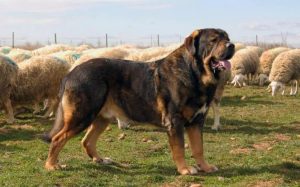 Spanish Mastiff is a very intelligent dog breed well known for their size, with weight around 200 pounds. They are very protective of their master and family members.

They are giant size dog breed originally bred for guarding livestock, they are very calm except around people they don’t know.

Origin And History Of Spanish Mastiff

The Spanish Mastiff is an ancient breed. It has first appeared on the Iberian Peninsula over 2000 years ago. They were mostly represented by the Greeks and Phoenicians before the Roman invasion.

Dogs of this breed very much mentioned in writings and the first dog of this breed was mention in around 10 A.D. by Virgil in his poem ” The Georgics”.

This large breed was employed as a herding dog in Europe, where he used to transport and protect the Merino livestock. According to a report, In 1526 around 3.5 million Merino sheep were migrated with at least 1 mastiff for every 100 sheep.

Yes, Spanish Mastiff is suitable for children and they seem to be more playful, energetic and affectionate around children. These dogs are generally very tolerant and patient with children of all age.

However, being so giant in size they can unintentionally hurt a young child, especially young Spanish Mastiff tries to play rough therefore supervision is needed when interacting with children.

The temperaments of Spanish Mastiff Are protective, active, loyal and serious. They are truly affectionate canines who tend to bond quickly with its family member and if a situation occurs they will protect its family risking its own life.

Spanish Mastiff tends to be lazy at times, though they are quite agile and quick. They are easy going with children and other pets if raised together but should be supervised around dogs they don’t know.

The Spanish Mastiff has a giant and bold personality, because of the large size they are not suited for apartment living. These dogs are somewhat inactive when indoors, so at least a large yard is required for their daily exercise.

Dogs of this breed are very quick and alert, they always watch around their territory even if it seems like they aren’t. This giant breed requires a lot of socialization from their early age onwards otherwise they turn to be stubborn when adult.

Training a Spanish Mastiff can be challenging and they require an experienced trainer who can establish a leadership. They do not respond well to harsh training, but training with exciting treats and praise can easily make them enjoy training

Spanish Mastiff needs training throughout their life to ensure that they their role within the family.

As with other large breeds, the Spanish Mastiff is prone to a number of health disorders:

The Spanish Mastiffs are found six in color patterns:

Dogs simiar to Spanish Mastiff are: