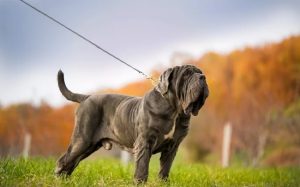 Neapolitan Mastiff dog was bred in ancient times to protect its family and it is incredibly loyal and devoted to its family. These breeds are great guard dogs and are not gentle giants as well. They are affectionate with their family but are suspicious of strangers and tolerant of acquaintances.

The Neapolitan Mastiff dog was purposefully bred in order to scare away intruders without the dog having to act. Its giant muscular body can knock down almost any intruder. Its huge head with short, powerful jaws and large teeth can crush an opponent.

Neapolitan Mastiff is a direct descendent of the Molussus, the ancient mammoth war dogs of the Middle East. It is first and foremost a working breed, whose purposes are gently varied. It has been primarily a farm helper, also serving as a herding dog, flock protector, cattle drover, cart dog, large game hunting dog, and personal protection dog.

It’s not that Neapolitan Mastiff dogs are not child-friendly but because of their they are not good and safe around toddlers. They will be best suited for who have older children who probably knows how to handle them. Teach your child not to make too much noise and shout around Neos, they might get excited and become rough players.

Neapolitan Mastiff may tend to protect the children from other kids especially if they see any kind of wrestling is involved while playing. They love their play-mate but can be quite reserved with other children. So, it is necessary you socialize your Neos at an early age with every one including other animals.

The Neapolitan Mastiff are quiet, watchful and protective of its family. They are giant and is their muscular body is enough to scare an intruder without even barking or being aggressive. They are not aggressive dogs in fact, these dogs have a heart of gold.

They are quite independent dogs, but prefer spending time with their family. Neos are very possessive and may not like the interference of any unknown person in the family circle. These dogs are affectionate but will likely to dominate the people to rise in the position. Neapolitan Mastiffs are fearless and independent and have a strong mind of their own. They like to do things on their own in their own time. However, they are obedient to their family members.

Neapolitan Mastiffs should be introduced to many people and places so that they don’t get suspicious of anything and anybody.

Some Facts About Neapolitan Mastiffs

It is important to be awared of the following health issues if you have Neapolitan Mastiff at home:

Neapolitan Mastiff can give birth to 3 to 4 puppies.

The average cost of the Neapolitan Mastiff puppy is about $2,300 USD.

The male Neapolitan Mastiff stands up to 26 to 30 inches whereas, the females stands till 24 to 28 inches.

Which Dog Breed Are Neapolitan Mastiffs Similar To?

Some of the dogs breed similar to Neapolitan Mastiff dogs are as follows: