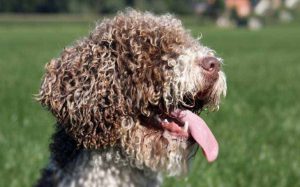 With their intelligence, hard work, and keen ability to learn things, they have proved that they can as work all- around farm dog.

The Spanish Waterdog was used for many purposes including herding, retrieving, rat patrol, and protection.

Today the Spanish Waterdog is recognized by European and American registries. In January 2015 the AKC has classified it as a herding dog and granted them full recognition.

Spanish waterdog is generally well-going with children with a clown face and demands human’s attention even from kids.

Like other herding dogs, the Spanish Water dogs tend to children and sometimes can be overly sensitive to sudden stimuli. Therefore serious supervision is need by an adult when interacting with kids.

The temperaments of Spanish Water Spaniel is -energetic, intelligent, and affectionate. They generally get along well with other dogs and pets; they can be suspicious of strangers.

The Spanish Waterdogs are quite smart and hard-working and enjoy learning which response best to positive reinforcement. They are quite active by personality and likes to be kept busy all the time, they are very alert dogs and typically make good watchdogs who have a good sense focusing on a specific task.

Spanish Water Dogs do not possess aggressive behavior but are quite protective of their family and property. If you are planning to adopt one of these breeds then you need to be very patient.

The Spanish Water Dog is a highly trainable breed as they are quite versatile and perform its task with competence and dignity. Dogs of this breed have a natural herding and guarding instincts so they do their best when any type of task is given to them. They can be protective and territorial so early socialization is needed to prevent them from becoming wary around strangers.

As like all other breeds, the Spanish Water Dogs also prone to suffer from some hereditary disease, which includes:

A Spanish Waterdog can give birth 4-6 puppies at a time. If you are willing to adopt a Spanish waterdog in your family, then you need to spend an amount of $1000-$1200.