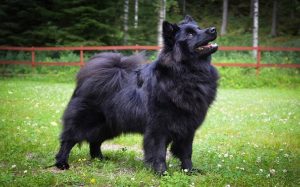 The Swedish Lapphund was originated in Sweden, originally used as a hunting dog. It was used for hunting, herding, and guarding on the farm. They are a cheerful, lively fog that does great as a family pet and their companion. They are suitable for an active family that is involved in physical exercise.

The Swedish Lapphund is a medium-sized dog that is very active, friendly with family and does great as people’s companion. They need regular exercise, so take them for running, playing, and jogging. They are suitable for the apartment as long as you meet their level of activity requirement.

Temperament of the Swedish Lapphund

The Swedish Lapphund is a very lively, playful, and intelligent dog that enjoys working and playing with its family members. Involve them in regular family activities as they are happy to be working. They are an alert dog that will bark at the things that it finds suspicious. Therefore, they make a great watchdog that will warn you about any unusual activities going on.

The Swedish Lapphund is very vocal so their unnecessary barking and whining can disturb your neighbor. So they should be taught to stop barking when being commanded. Leaving them all by themselves for a long period of time can also lead to excessive barking and separation anxiety.

Personality of the Swedish Lapphund

The personality of the Swedish Lapphund is active, smart, and independent. They are an energetic dog so they need to be challenged physically and mentally. As a smart dog, they do not need to be trained with extra effort. Their herding instinct can strike sometime and they may start to chase small animals. Therefore, it is necessary to keep them on a leash while taking them out and should be kept in a well-fenced yard.

Training Swedish Lapphund is quite difficult to train for a novice owner but an experienced owner can train this dog with not many difficulties. They respond well to positive methods of training. So, reward them with delicious treats, vocal praises, and a gentle pat on the back. Do not use force hand and harsh words on them. This might scare them or just make them aggressive. So a gentle behavior around them is necessary.

The Swedish Lapphund get along with children pretty well. They are playful who enjoys the company of kids and both makes an excellent playmate for each other. Although they get along with kids, their interaction should always be supervised. Also, teach your kids to behave around dogs and treat them gently.

How Does Swedish Lapphund Behave Around Strangers?

The Swedish Lapphund is generally aloof with strangers and does not trust them easily. They will bark at them if they see some unfamiliar person approaching them, though not aggressive. If they are introduced properly, they get along with them and become welcoming of them. So, early socialization is the key to Swedish Lapphund behavior around strangers.