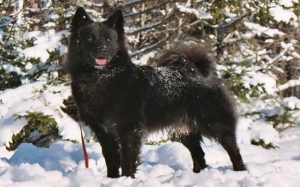 Swedish Lapphund is a multi-talented dog breed which you can use as a hunting dog, guard dog, and reindeer herder as well. It is a rare breed who has earned a very little fame except for its homeland. But the few people who are aware of this breed know that they make a very good family companion.

Lively, kind, affectionate and alert are words used to define Swedish Lapphund. These dogs are attentive and willing to work and please. They are suitable for obedience training, herding, tracking, etc.

Origin And History Of Swedish Lapphund

The Swedish Kennel Club recognized the Swedish Lapphund as a distinct breed in 1903. The first dog of this breed was registered as named Halli. This breed is today considered Sweden’s national dog.

The Swedish Lapphund is suitable for families with children. They are very tolerant and likes to play a lot. Dogs of this breed make tireless playmate for kids. However, as these dogs were used for hunting in ancient times, therefore they have a high herding instinct and may tend to nip at running kids to herd them.

It is important never to leave your children alone with them or any dog breeds, always supervise them.

The temperament of Swedish Lapphund is lively, loving and alert making them an amazing family pet and watchdog. They may be aloof towards strangers. Like all other herding dogs, this dog breed also tends to bark a lot, so if don’t want to hear any complaints from your neighbors, you’ll need to teach them the right time to bark.

The Swedish Lapphund is an active and intelligent breed, and therefore they need daily exercise to keep them healthy and happy and to prevent them from becoming destructive and noisy.

Dogs of this breed have a very affectionate behavior, they like to be in a company all the time, so it is very important to make sure that you are giving them enough time. If they are being neglected too often by their master, they end up to become depressed and unhappy which can later lead to all sorts of bad consequences.

Swedish Lapphunds are highly trainable dogs, but early training is essential to prevent excessive barking in the future. Moreover, they are independent thinkers, so don’t expect from them to be obedient while training. But yes, they do respond well to positive reinforcements methods such as their favorite play, food rewards, and praise. Keep training sessions short and fun so that they don’t get bored easily.

Facts about Swedish Lapphund are:

Generally, the Swedish Lapphund is healthy dogs but tend to prone from some hereditary health problems, such as:

The Swedish Lapphunds are found in two colors:

A Swedish Lapphund dog can give birth from 4-6 puppies at a time. If you are planning to have a puppy of this breed, you will need to spend somewhere between $400 -$600.

Dogs similar to Swedish Lapphund are: