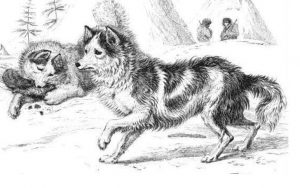 Tahltan Bear Dog, also known as Chien d’ours de Tahltan or just Tahltan, was a hunting breed of dogs that is unfortunately extinct now. Though they were small-sized, they helped hunters in hunting animals like bears, large cats, elks, beavers, and porcupines. They were also widely used as watchdogs.

The Tahltan Bear Dog’ used to have a fox-like body along with with a tapered snout, thick paws, a fluffy and medium-sized tail. They were comparatively smaller than other hunting breeds and their owners often used to carry them in pouches. They had an average-sized head and straight pointed ears.

The Tahltan bear dogs were originated in the Pacific Northwest territories Canada where they were raised by the native Tahltan Indians. They descended from the lines of Pariah and Spitz breeds and were always centralize in the cold regions of Southern Yukon and British Columbia.

Bred and raised for hunting all kinds of animals, especially bears, the Tahltan dogs used to confuse or surround the animals until the hunters came close enough to strike them. Though they were small in terms of size, they were very vicious when in a pack. Eating small types of birds, fish, and meat was their usual diet and they thrived in such extreme cold.

When European explorers entered and started residing in the regions of Southern Yukon and British Columbia, they brought different kinds of other dogs for hunting games. As the flow of the explorers and their dogs started increasing, the numbers of the Tahltan bear dogs gradually started decreasing.

And as the Tahltan dogs’ number declined, breeders stopped breeding them as they were getting replaced by other dog breeds. Though there haven’t been records of any living dogs of the breed past 1970, few people claim that a group of breeding specialists’ effort has helped this breed survive till now. The Canadian Kennel Club (CKC) has already revoked its recognition of this breed declaring it to be extinct.

The Tahltan Bear Dogs used to have very courageous, kind, and affectionate temperature. They were brave enough to face and scare a bear although they were small in size. They protected their owner’s house and their livestock while herding.

Apart from being a vicious hunting dog, Tahltan bear dogs were really kind and friendly with other smaller pet animals and humans. They were so attached to their owners that they would even share the bed with them. They would even adjust in a small tent if they were with their loved ones.

As the Tahltan dogs were used for hunting, they weren’t usually considered good for families with children. Though they were considered playful, they weren’t suited well for kids as they might show up their primitive hunting skills during play. And keeping the breed’s small size aside, it still was a vicious hunting dog. Therefore, these dogs probably weren’t much child-friendly.

The Canadian dog breed was found in the following colors: