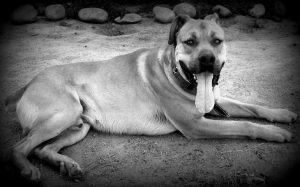 Bullenbeisser was a medium to large-sized dog breed with big heads and thin but muscular legs. These dogs were widely known for their agility and strength as they were mainly bred for bull-baiting and boar hunting.

The Bullenbeisser dogs had wide front stances, flat chests, huge heads, tall ears, and muscled cheeks. They also featured extra flaps of skin around their neck and they played a major role in developing the Boxer breed.

The origin of Bullenbeisser dates back in 370 AD in Germany when the Assyrians migrated to Europe from Asia. As the Assyrians needed large fighting and hunting dogs to accompany them in surviving, they raised a lot of these Molosser-type dogs. They were very common to the German people and the lands of the Holy Roman Empire for centuries.

During the time they lived in the German lands, they served as watchdogs and guards of the native people. They served as protection of their owners during the wars as strangers wouldn’t dare to enter the property seeing these monstrous dogs chained at the gate. Besides that, they also assisted hunters in bringing down games like bears, boars, and wolves.

How Did Bullenbeisser Become Extinct?

The Bullenbeisser breed faced extinction in the early 1900s because of their wide use in crossbreeding with other dogs. As breeders wanted their agility and powerful body mixed with other breeds, they bred in excess amount. This caused the numbers of these dogs to decline as the breeders didn’t focus on increasing their numbers.

Though a large number of crossbreeding led to the creation of the Boxer breed (created by crossing Bullenbeissers and bulldogs brought from Britain), Bullenbeissers slowly vanished. And by the beginning of the 20th century, they disappeared completely. Another breed that got extinct due to over crossbreeding was the Old English Bulldog.

The Bullenbeisser had a loyal, intelligent, and fun-loving temperament. As they were guard and hunting dogs, they were extremely faithful to their owner. Their intelligence nature helped them to understand commands and hunt down animals. Despite their aggressive and ruthless hunting nature, they loved playing and pleasing their owners.

Were Bullenbeisser Dogs Good For Children?

No, Bullenbeisser dogs weren’t too good for children because of their aggressive hunting skills. Though they liked to play along with other pet animals and humans, their muscular body and hunting instinct would have easily been harmful to kids.

As these dogs were trained to protect their masters’ homes, they would also easily harm any stranger kids when they show up. Hence, the Bullenbeisser dogs wouldn’t have been preferred more by families with children.

Here are lesser-known facts about Bullenbeisser:

Bullenbeisser dogs were found in the following colors:

A mother Bullenbeisser used to give birth to 4-9 puppies at a time.

Following are the dog breeds which are similar to Bullenbeisser:

Check out Doglime for information about more extinct dog breeds.