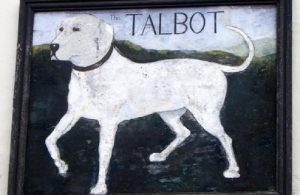 Talbot Hound was a small to medium-sized hunting dog breed that was extremely popular during the middle ages in England. These dogs were used to track down both big and small games like bears, wolves, deers, and wild cats.

The Talbot Hound’s appearance included deep chest, short legs, a very long curved tail, and long drooping ears. It is believed that this extinct breed is the ancestor of the modern Beagle and Bloodhound.

Talbot Hound is thought to originate in Normandy, France in the 11th Century. It is believed that William the Conqueror, the first Norman King of England, brought this dog to the British lands in 1066. Though these dogs weren’t found in England before the 1550s, the name ‘Talbot’ was already a common name for hounds in the medieval ages.

The Talbot Hound dogs clearly existed by the 17th Century as their names were encrypted on poems and plays by famous people. These dogs are in the poem ‘The Chase‘ where the writer considers it a prime example of leash hounds to catch thieves. Moreover, they were also mentioned in a Nobel by Talbot Hound claiming to stand behind the author.

The Talbot Hounds were one of the most accurate and efficient tracking hounds. They helped hunters in tracking down the animals to be hunted by using their highly reliable and powerful smelling abilities. Therefore, they were mostly preferred by English hunters during medieval times.

How Did Talbot Hound Got Extinct?

The Talbot Hounds were gradually disappearing at the end of the 18th Century due to lack of use and proper conservation. As the use of other dog breeds for hunting purposes increased, people really didn’t care much about these dogs.

Neither were people using the Talbot Hounds for hunting nor were they doing any efforts to increase and conserve their number. Therefore, this slow but thorough scenthound breed got extinct before the beginning of the 19th century.

The Talbot Hound’s temperament was hard-working, affectionate, kind, and gentle. They were widely known for their pleasing and affection seeking nature. They were very hard-working when it came to hunting as they wouldn’t stop until they tracked down the animals. Not only that, but they were also protective of their loved ones and guarded the house against wild animals and intruders.

Yes, the Talbot Hounds were extremely child-friendly because of their gentle and affection-driven nature. As they loved pleasing and gaining attention from humans, they were very good with kids. Moreover, these gentle dogs admired playing with kids all day when they weren’t being used for hunting. Therefore, they were quite preferred by families with children.

The Talbot Hound was found in only white color.

A mother Talbot Hound used to give birth to 3-8 puppies at a time.

Here are some dog breeds which are similar to Talbot Hound: