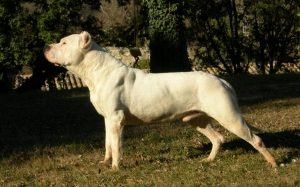 The Cordoba Fighting Dog had muscled jaws, strong chest, medium-sized snout, and muscular body. Here is the information about the history, temperament, and how did it reach extinction.

The Cordoba Fighting Dog originated in the 19th century in Cordoba, Argentina for the purpose of hunting and fighting purposes. They were first bred and raised by the native Argentines. As they needed dogs with ferocious fighting nature and willingness for wars, they created this breed. Not only for wars, but they also served as great watchdogs and cattle dogs.

The sport of dogfighting became extremely popular throughout Britain, Argentina, and England during the 19th Century. As Argentina was developing fast as a supplier to other countries, it also contributed to creating a vicious fighting dog for the sport.

After years of using Terriers and Bulldogs in fights, people thought of creating a ruthless dog with great strength, power, and agility. So, they crossed all the fighting dogs of the era such as English Mastiff, Bull Terrier, Boxer, Bulldog, and Alano Espanol. They succeeded in achieving in what was called the Cordoba Fighting Dog.

Following that, these dogs were used at huge quantities in the sport of battling two dogs.

How Did The Cordoba Fighting Dog Got Extinct?

As the Cordoba Fighting Dogs were bred for dogfighting, they had high pain tolerance and willingness to fight till death. Though their never-give-up nature was good for the sport, it was extremely bad for their existence.

Many Cordoba Fighting Dogs died in the fighting pits during the battles. But people used even more and more of these dogs in dogfighting without focusing on preserving them. They were also used in crossbreeding with other breeds but their numbers were declining gradually. And by the mid-20th century, these dogs got extinct.

Unlike other dog breeds, this Argentine breed didn’t want to mate whenever they encountered dogs of opposite sex. Instead, these bloodthirsty animals used to involve in bloody fights rather than mating. They were strongly driven by their fighting spirit.

No, the Cordoba Fighting Dogs weren’t good for children because of strong fighting instincts. They were bred and raised for hunting and fighting which is why they were always vicious. Though they were loyal and friendly, it was not appropriate leaving the kids unsupervised with these dogs. Hence, this breed was not good for children.

Some Interesting Facts About The Cordoba Fighting Dog

The Cordoba Fight Dog was found in the following colors:

A mother Cordoba Fighting Dog gave birth to 4-8 puppies at a time.

Here are some dog breeds which are similar to the Cordoba Fighting Breed: