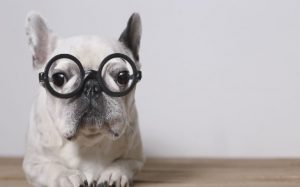 With cute pointing ears, French Bulldogs are beautiful dogs that will brighten up your day with their adorable face and comical personality. They have the motto “Love the one you are with” which clearly tells us that they are the most loving dog anyone can ever have.

French Bulldogs are suited for both apartment dwellers or one with a big back yard. To understand your pet’s behavior and to keep them happy, you must know about their history, health issues as well as their personality traits.

The breed got their name ‘French’ when the lace makers moved to France taking their miniature canine with them. The tiny Bulldogs quickly became famous in France, although the European breeders preferred rose-shaped ears, rather than the large erect bat-like ears.

In 1897, the French Bulldog Club of America was formed making the way to perform in the Waldorf-Astoria ballroom in 1898. After that, the breed prominently flourished all over the world. The breed got their nickname “Frenchie” which are still used and loved today.

Playful And Lively Behavior Around Children

Frenchies get along with children very well and love playing and following the children. If not given attention by the children, they will ask for it whether by barking or interrupting whatever they are doing.

French Bulldogs are protective towards their playmate. Frenchies are very gentle and caring with children. Your children are perfectly safe around Frenchies.

French Bulldogs are known to be one of the best companion in the world. They are small, easy to handle and are very well behave around new people and animals. Frenchies have the reputation for being clownish and loving. They will steal your attention in a minute with their clownish behavior.

They don’t need much exercise which makes easy for the owners who cannot afford enough time exercising. You will find your Frenchie happily curling up and relaxing on the sofa. They are more like a couch potato!

French Bulldogs are truly people oriented dogs. They don’t like being left alone. For that reason, people who work all day long, should not commit to a French Bulldog since they easily develop separation anxiety. They will become depressed which may lead to chewing and destruction of house.

French Bulldogs doesn’t need too much exercise. They will need at least 15 minutes of walk and a sessions of chasing a ball that’s it! It is easy to live with a French Bulldog however, Frenchies are very stubborn when it comes to training.

In contrast, the French Bulldogs will simply ignore your cues while training and are known to quickly lose interest in training sessions. Likewise, the training sessions should be kept short and fun. Therefore, offering treats would help training a stubborn Frenchie.

The average life expectancy of the French Bulldog is 10-12 years. There are potential hereditary defects and disorders found in French Bulldogs such as

There are three types of allergies; food-allergy which can be treated with elimination of some food or diet. Contact allergies which is by substance like, flea powders, bedding or dog shampoos. And the other, inhalant allergies which is cause by airbrone condition like dust, pollen or mildew.

Hemivertebrae is a condition which is caused by malformation of one or more vertebrae that shapes like wedge or triangle. It will cause pain in the spinal cord or may lead to pain, weakness or paralysis.

The soft palate is the extension of the roof of the mouth. When the soft palate is elongated it can block air and may cause difficulty in breathing. It can be treated with surgery of excess palate.

French Bulldog’s puppy price varies depending upon the color, gender and the breeder. You can expect the cost between $1500 – $3000.

Generally the French Bulldogs stands up to 11-12 inches weighing an average to 16-20 pounds.