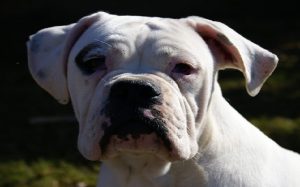 Valley Bulldog is a medium-sized, muscular dog which is also called a Bull-Boxer. It was originally bred by the mix of the English Bulldog and the Boxer which is a friendly and affectionate dog that do best as a family companion. You can keep it in an apartment too but it need exercise regularly to stay fit and healthy.

The appearance of the Valley Bulldog depends on its parents. It can either born as a taller version of the English Bulldog or a shorter version of the Boxer. It has a strong shoulder, broad head, and a muscular and powerful body. One interesting thing about their nose is, they can either have a long muzzle like the Boxer or a pushed in the nose like the English Bulldog.

The Valley Bulldog was developed in Annapolis Valley, in Nova Scotia, Canada, from where it got its name. They were bred from two-parent breeds; Boxer and English Bulldog. The main goal to develop the Valley dog was to have a well-tempered dog with an athletic body like the Boxer and courage and spirit like the English Bulldog.

The Valley Bulldogs were bred to herd and look after livestock in the valley. They still remain a great helper and family companion in that area. Although outside the valley area, it is considered as a rare breed, it is still popular in the Annapolis Valley.

The Valley Bulldog is a very friendly dog that gets well with children of any age. They are playful and can make a great play partner with family children. They can get well with unfamiliar children as well but a proper introduction is needed and should be kept on a leash while doing so.

The Valley Bulldog interaction with kids should be always supervised and guided to avoid any accident.

Temperament: The Valley Bulldog has an excellent temperament and if socialized properly, it gets well with any other breeds and human beings. Therefore, early socialization is needed so they do not get shy or anxious around other people and dog breeds.

Behavior: The Valley Bulldog do clownish behavior sometimes and make people around them laugh. They are attached strongly with one particular person in the family and see him/her its leader. So, if they are left alone without its human owner for a long time, they might get depressed or have separation anxiety.

Personality: The Valley Bulldog has a brave and courageous personality.
They are close with family and are protective of them. If they sense any threats coming towards their people, they won’t get afraid to stand and defend their family.

Training Valley Bulldog is an easy task to do if you can establish a firm and consistent leadership upon them. They need a leader who is patient and can train them with gentleness. Different interesting tricks and dog game should be involved in the training to keep them interested and focused. Use positive methods of training to motivate them. Delicious treats and a gentle pat after completion of every task will encourage them.

The Valley Bulldog is generally a healthy breed with a life expectancy of 10-12 years. During these years, it can suffer from a few canine diseases, which are explained below:

The Valley Bulldog come in the following colors:

Cost: The average cost of the Valley Bulldog is between $600-$800. However, the cost varies to the quality of breeders.