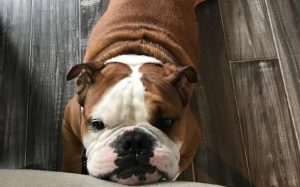 If you are looking for a dog which has a confident personality with a muscular and strong appearance, then Victorian Bulldog is for you. They are healthy and fit dogs which makes an amazing family companion.

Victorian Bulldog is well known for their calm, playful and faithful manner. They are dogs who are very much in demand among the upper-class people.

The Victorian Bulldog has a sweet, gentle and friendly temperament. They are well-going with humans of all age groups. They are active and alert by nature which makes them good watchdogs.

Victorian Bulldogs are reliable and trustworthy breed, you can depend on them to alert of any danger and will even protect you from it. These dogs are very loving and affectionate and they love all kinds of people and animals.

Victorian Bulldog is a loyal and docile dog with a typical bulldog personality. Although their appearance can be slightly similar to an aggressive type of dog, they are very friendly and is known to be the gentlest of dogs. They are popularly known for their courage and guarding abilities.

Victorian Bulldog is a people-oriented dog who seek human attention. The only thing that makes them happy is human attention and to be involved in family activities. This breed is nice with family pets but can be little wary with strange dogs. But proper and early socialization can help them prevent this.

The Victorian Bulldog is child-friendly breed which loves playing with both familiar and kids they don’t know. However, it is necessary to supervise them with children who don’t know to behave with dogs.

How Does It Feel To Live With Victorian Bulldog?

The Victorian Bulldog is wary around strangers, so it is important to socialize them from their puppyhood. They are protective and alert dogs who will bark to let you know if there is something unusual. Though the rest of the time, they are in a happy and lively mood.

The Victorian Bulldog is easy to train with proper and positive techniques. And if they are in the hands of an experienced trainer, they will learn more quickly and will enjoy their training.

What Makes Them Aggressive?

When you first have a glance at Victorian Bulldog, you will feel like they are a serious, dominant and aggressive type of dog. But you are wrong, don’t let his appearance fool you. They are very calm, gentle and friendly dog. However, because of their protective behavior, they may tend to show some signs of aggression towards strange dogs but are not likely to bite them.