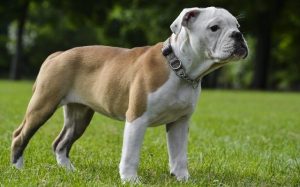 This dog is an apartment dog and does well indoors with moderate exercise regularly. It does well in a moderate climate as they cannot tolerate either hot or too cold climate.

The Victorian Bulldog is slightly taller than the English Bulldog with a broad head, wide muzzle and short nose that has pushed in appearance. The eyes are round, set apart and dark in color. The chest is deep and their body is muscular and strong.

The Victorian Bulldog was originated in England, in the 1980s. It was bred by a man named Ken Mollett, who was an enthusiast of Bulldogs. It is believed that it was developed with a mix of four breeds that includes English Bulldogs, Bull Mastiffs, Bull Terriers, and Staffordshire Bull Terriers.

The original purpose of breeding Victorian Bulldog was to keep it as a companion dog for families.

The Victorian Bulldog is not yet recognized by American Kennel Club, as of 2019.

The Victorian Bulldog is a friendly dog that gets along with children very well. They like kids and loves to play with them and with unfamiliar children too.

You should teach your kid to behave around dogs and children’s rough handling should be controlled.

Temperament: The Victorian Bulldog has a sweet, gentle, and friendly temperament. They are friendly with all human being and are not at all aggressive. It will alert its owner of any unusual activities in the area and warn them by barking. Therefore, they make a great watchdog.

Behavior: The Victorian Bulldog thrives for the company of their family and seeks their attention. If you leave them alone without any human interaction, they will show their destructive nature. They start to chew on stuff and start barking. Therefore, it is best not to leave your Victorian Bulldog alone for a long time.

Personality: The Victorian Bulldog, though seems like an aggressive dog, they have a very docile and calm personality. They do not get aggressive easily and are friendly with people. However, they do not do well with other pets as they tend to have dominant nature over them. Training them together with other pets and early socialization can help them get along well.

Training Victorian Bulldog is not for an inexperienced dog owner who is not familiar with dogs temperament and behavior. They are of dominant nature, so the owner should establish a firm and consistent leadership upon them. They should be treated with kindness and gentleness.

Do not use force hand on them as it may lead to their aggression. Reward them with delicious treats and vocal praises as to motivate them.

The average life span of the Victorian Bulldog is between 12-14 years. During these years, they can face the following possible canine health conditions:

Height and Size: The average height of the Victorian Bulldog is between 17-19 inches and the average weight is between 55-75 lbs.

Cost: The average cost of the Victorian Bulldog puppy is around $1300USD. However, the cost may vary with the quality of the breed.