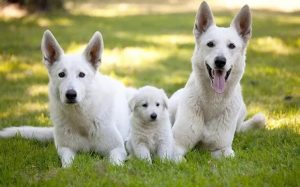 The appearance of White German Shepherd is muscular, strong but not bulky. Their body is covered with slightly longer coat than the colored German Shepherd. The tail is feathery and hangs down with slight curve on the tip.

The origin of White German Shepherd was in Germany by Captain Max von Stephanitz in 1889. The White color was considered as a fault and was not allowed in various shows. However, many worked for its recognition and also formed the club after its name in Canada and the U.S. After much difficulties, they became successful to get White German Shepherd registered in the United Kennel Club as a breed.

Yes, White German Shepherd is a child-friendly dog that gets along with all age children pretty well. They are playful who loves the company of kids. However, small children’s interaction with them needs to be supervised as to avoid any kind of accidental knock over.

Small kids might play rough that may not be acceptable by your White German Shepherd, so do not leave them alone.

Temperament: The temperament of White German Shepherd is gentle, friendly, and fun. They are very devoted to their family and are protective of them. If they sense any kind of harm towards them, they do not back off from defending them. Therefore, they make great guard dogs.

Behavior: White German Shepherd forms a strong attachment with its family members and is very protective of them. You might find a behavioral problem like aggression when they see someone approaching their family. They need early socialization so they are gentler with the guest in the house.

Personality: The personality of White German Shepherd is loving, protective, and kind. They love their people’s company and enjoy spending time with them. They are a smart dog that catches on new commands and instruction quickly.

Training White German Shepherd is tough if you fail to establish a firm and consistent leadership on them They need a patient, active, and gentle leader. Once you develop leadership on them at an early age, start from obedience training and gradually move into the advanced training.

Reward them with delicious treats and lots of vocal praises to motivate and encourage them on training.

Never be harsh on your dog as it might make them fear you or they can even become aggressive. So, always train them in a gentle way even if they make some mistakes. After all, not even humans are perfect.

Cost: The average cost of White German Shepherd is between $700-$1200 USD. The price might vary with the quality of the breeding.

The average height of adult White German Shepherd is between 23-25 inches and the weight is between 65-85 pounds.