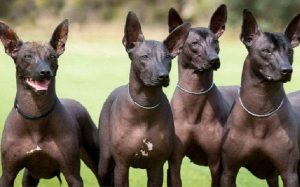 The Xoloitzcuintli (pronounced as show-low-eats-queen-tlee) is an ancient breed also known as Mexican Hairless dog, Tepezcuintli or just Xolo. It comes in three different sizes, which are, toy, miniature, and standard.

They also come in both coated and non-coated variety which can be in the same litter. It is best suited in a warm place and cannot tolerate cold weather due to their hairless body.

The Xoloitzcuintli has a hairless appearance that possesses grace, elegance, and strength. All three sizes have the same sturdy, muscular, and lean body. They have a thoughtful looking expression with almond-shaped eyes. The neck is slightly long, elegant, and powerful. The legs are straight and well-muscled.

The Xoloitzcuintli was originated in Mexico that has a history that goes back to about 3000 years. Ancient Aztecs considered Xoloitzcuintli as sacred and usually sacrificed and buried alongside their owner. They were used as healers in ancient times.

People believed, it would cure any disease and they used to place its warm skin on the wounded area to draw out the pain and sickness.

The United Kennel Club recognized Xoloitzcuintli in 1993 and the American Kennel Club in 2011 as the member of the Non-Sporting Group. it is taken as a national treasure in Mexico.

The Xoloitzcuintli is very good with children of all age and can get along with them well. However, they do not like their tail and ears being pulled, so teach your kids to behave around dogs. They have delicate skin and small children might pull and play rough, Therefore, close supervision during Xoloitzcuintli interaction with kids is needed.

Temperament: The Xoloitzcuintli has a sweet, loving, and calm temperament. They are active and naturally protective of their people. They are wary of strangers and will bark at them if they see one approaching. Therefore, they make great watchdogs and also guard dogs.

Behavior: Xoloitzcuintli is very attached to all the family members and especially with one specific person. If it is left alone for a long period of time, it can be depressing and get separation anxiety. Therefore, it is not a good idea to leave it alone for along time.

Personality: The Xoloitzcuintli has a friendly, loving, and smart personality. They love their people and thrives to be around them either playing or just sitting by their side. They are very adaptable dogs that can adjust both in a large family or just with a single person.

Training Xoloitzcuintli is not so hard job to do as they are smart and catch commands quickly. However, they should be taught from an early age. Train them with firmness and consistency.

Do not use harsh words or a forced hand on them as it will scare them and they will not be able to focus on training. Reward them with treats and vocal praises as to encourage and motivate them.

The average life span of the Xoloitzcuintli is between 13-18 years with only one main hairless dog’s health problems:

The Xoloitzcuintli comes in following colors and markings according to the American Kennel Club:

Height and Size: The height and size of the Xoloitzcuintli come in three types:

Cost: The average cost of the Xoloitzcuintli puppy is between $600-$800 USD.