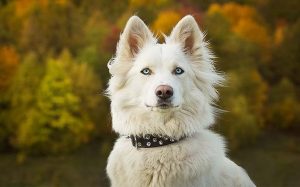 The Yakutian Laika, also known as Yakut Laika is a medium-sized bred as working dogs and hunting dogs. It is a versatile dog with an excellent sense of smell, vision, and hearing. They are known to be aggressive towards their prey but extremely gentle and kind towards the human being.

The Yakutian Laika is a sled dog with a strong and muscular body. The coat is double with a medium length outer coat and dense undercoat that is soft to touch. The eyes are wide-set, almond-shaped that is either blue or dark brown in color.

The Yakutian Laika was originated in the Arctic belt of Yakutia, Russian Siberia. It was first documented in the 1800s and were used by native Yakute people for hunting, herding as well as a family companion dog. They were mainly used for pulling sleds where each sled had a team of 11 dogs.

In the mid-1900s, the need of Yakutian Laika diminishes and slowly their number began to decrease. But luckily, a group of people worked to reclaim the breed and they succeed.

In 2004, it was recognized by the Russian Kynological Federation. The American Kennel Club has kept this breed in the Foundation Stock Service (as of April 2019) since 2017.

The Yakutian Laika is a child-friendly dog as it is very loving and protective towards children and can make a great playmate for them. However, they do not tolerate harsh behavior, so small children should be properly supervised. They get well with older children who know how to handle and behave around dogs.

Small kid’s interaction with Yakutian Laika should always be supervised.

Temperament: The temperament of the Yakutian Laika is active, intelligent, and affectionate. At one hand, they are a very hard working dog which is active and fully devoted to its work. On the other hand, it does great as a family companion as it loves to be around family and is protective of them.

Behavior: Yakutian Laika is a working dog, which needs to be involved in regular activities to keep itself occupied. If they do not get their required activity, they can become anxious and could even get depressed. To avoid this behavior, they should be regular exercise.

Personality: The personality of the Yakutian Laika is gentle, loyal, and obedient. They are loyal to their family and are very devoted to them. They are wary of strangers that do not let anyone pass without a proper introduction. Therefore, they are great watchdogs and guard dogs.

Training Yakutian Laika is not a difficult task to do as they are very smart and obedient. However, they are not for a novice owner but they need an experienced dog owner who knows the dog’s temperament and behavior.

Establishing a firm and consistent leadership is very important as they have to take you as their leader. Use positive methods of training by rewarding them with treats and lots of vocal praises. This will motivate them and keep them focused on the training.

Yakutian Laika is generally a healthy breed with a life expectancy of 10-12 years. During these years, they can face the following canine diseases:

The Yakutian Laika comes in following colors and markings according to the American Kennel Club:

Height and Size: The average height of the Yakutian Laika is between 21-23 inches and the average weight is between 40-55 pounds.