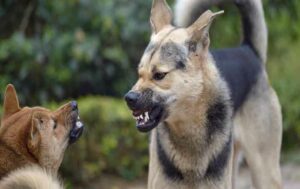 Alpha training is the dominance training similar to the wolf pack. The dogs are supposed to be a member of a pack and you; the dog owner is the leader of that pack.

The alpha training might differ from trainer to trainer. Some training patterns may be the same but there will always be something that is new in the training.

Let’s discuss further the alpha training in the article below!

Alpha training can be useful when training aggressive dogs, who act very aggressively around kids and shows signs of snarling and growling when you approach them near their toys or foods.

The dominance training and “the alpha dog” training actually have many negative sides and can be the wrong way to train your dog. The alpha training method can affect the human-dog relationship.

The alpha training style basically is the method that makes you; the owner the supreme or king of the house. You always keep your dog below you and never see them equal to you. The alpha training suggests never allowing your dogs to be on the same level as you like inviting them to the bed or sofa you are sitting in and also never getting down to your dog’s level.

The alpha training doesn’t work positively as the other training methods do. It has more cons to it rather than pros.

Dogs when show barking, snarling and growling behaviour, are often mistaken as them trying to show dominance over the owner. But in fact, it is not the case, many dogs show such behaviour by trying to be defensive.

When two dogs are together in a household, one dog may take over another dog and achieve what he wants to achieve. But it is actually not the case of dominance. The behaviour can be the result of anxiety, insecurities and jealousy; wanting to be the favourite in the household. The situation can also be opposite at times.

The dog showing dominant behaviour might be dominated by the other dog. This behaviour changes according to the time and situation. So The dog trying to be the alpha is only a myth.

Alpha dog training is an old-fashioned training method. In the past, people had the concept of showing their dog who the boss of the household is. With time the training method is also changing and people are understanding the negative sides of the alpha training method.

In the past, people believed that the dogs were the ancestors of the wolves and adopted the alpha training method to train their dogs. But this fact was scientifically proven wrong and this method is slowly being discarded.