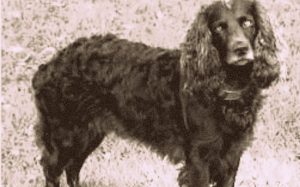 The Toy Trawler Spaniel was a Spaniel dog breed found in the United Kingdom until the early 20th Century. They were small-to-medium sized dogs bred and raised primarily as guards, sporting and hunting dogs.

The Toy Trawler Spaniel’s appearance consisted of long ears pointed forwards, long and curly coat. They also had short legs and a small head along with a compact body. It is one of the first few toy breeds that originated in the UK.

The Toy Trawler Spaniel is believed to originated in the early 1900s in the United Kingdom by crossing English Toy Spaniel with the older version of Sussex Spaniel. Though their original purpose was to be used as sporting dogs, they were used more like toy dogs and show dogs.

A Toy Trawler Spaniel named Robin was bred by the famous tennis player and horse breeder Lady Wentworth in 1911. Wentworth’s dog was the only known dog from the breed to be recorded as very few other people owned them. Robin died in 1920 after which the breed was gradually on the verge of extinction.

People believe that the Toy Trawler Spaniel got extinct in the early 1920s due to insufficient measures of conservation. As very few people owned them, it wasn’t really possible to breed and increase their population.

This was because the people who owned them didn’t either have the idea who else had dogs of that breed. In addition to that, they were also used in crossbreeding with other breeds with the desire of achieving some of their features into their crossbreed offsprings. Hence, they could do nothing to preserve the breed and the Toy Trawler Spaniel disappeared.

The Toy Trawler Spaniels had a bold, courageous, and sweet temperament. They were such kind and loveable beings that everyone could easily fall in love with them. Because of their intelligence, they learned new tasks easily and would rarely get bored with exercising and playing.

The Toy Trawler Spaniel dogs were also pretty good at guarding houses and livestock. They would never fear to attack any wild animals or intruders as timidity wasn’t in their dictionary at all.

Yes, the Trawler Spaniels were amazingly child-friendly dogs. As they were affectionate dogs, they loved the attention that they would get from children. They enjoyed being around and playing with kids all day long as both parties would get entertained and engaged. In addition to that, these dogs would also watch the kids and protect them in their owners’ absence. Therefore, this breed was really appreciated by families with children.

The Toy Trawler Spaniel were found in the following colors:

On average, a mother Toy Trawler Spaniel gave birth to 3-6 puppies at a time.

Visit Doglime for more information about other extinct dog breeds.