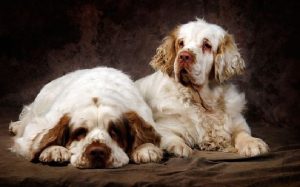 Clumber Spaniel is the heaviest among the spaniel breeds with a loyal and affectionate personality. They are very enthusiastic when it comes to working. These breeds are lively and thrive on human counterparts.

The Clumber Spaniel might get lazy at times, but don’t let their laziness fool you, they need lots of activity. However, their daily requirement can be easily fulfilled with a daily and long brisk of the walk. So, if you’re thinking of adding a Clumber Spaniel in the family then you must know everything regarding them from their training to behavior.

The first Clumber Spaniel was brought in America in 1844 by a British officer who was stationed in Nova Scotia, Canada. The Clumber Spaniel’s origin is about the French Duc de Noailles who shipped his entire kennel of spaniels to the Duke of Newcastle in England to save its prized dogs during the French revolution.

The Clumber Spaniel was quite popular with noble hunters in the mid-19th century. They even had a royal fan in Edward, Prince of W, who kept them at its Sandringham house estate.

The first American kennel club registered the Clumber Spaniel in 1978 but the Clumber spaniel club of America was not found until 1972. However, The breed is ranked 121st among the 155 breeds.

Clumber spaniels are extremely good around children because they love kids, those who will throw a ball for them to fetch. They are usually protective of children in the family and are more likely to walk away than to snap or growl if they are getting unwanted attention from kids.

Not all Clumber Spaniel, who is raised with kids will take care of them, especially if the child will behave poorly around your pet. Adult Clumbers who haven’t brought up with kids may do best in families with older children who understand how to behave with dogs.

The Clumber Spaniel personality ranges from reserved and dignified to everyone. They are quiet outdoors, and you will find them to be quiet at home as well. They will alert you to danger but are not indiscriminate barkers.

Temperament of Clumber S is affected by a number of factors including heredity, and socialization. They are also considered as fridge raiding, chewing are are sometimes referred as to as scavenger spaniel. Don’t be surprised when you find your Clumber stealing food from your plate.

Clumber Spaniel develops separation if left alone for long periods. They will be aggressive if not given regular exercises and not given proper time for training. In the other hand, they are not always a good watchdogs, they will go around the strangers wagging their tail if the stranger will offer something to eat.

The Clumber Spaniel dogs are easy to train because they are intelligent and quick learners. They are always eager to please their owners. However, they won’t respond to harsh training. The consistent training is required for this type of dog so that they will learn every things step by step.

Clumber Spaniel dogs are good with positive reinforcement training. Give rewards and treats so that they will be motivated to follow all positive activities. Early socialization helps them to be alert and friendly with family members.

Some of the facts related Clumber Spaniel dogs are as follows:

Clumber Spaniels are generally healthy but like all other breeds, they are prone to certain health conditions. Not all Clumbers get all of the following diseases but it is important to be aware of them:

Clumber Spaniel dogs can give birth to 2 to 8 puppies at a time.

Some of the breeds similar to Clumber Spaniel are: