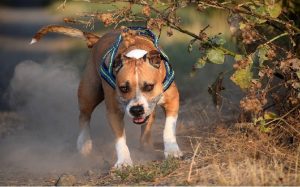 The American Staffordshire Terrier which is nicknamed as Amstaff is a medium-sized, short-coated American dog breed. It falls under the Pitbull group. Amstaff is a strong muscular dog with a broad head and well-defined jaw. They have dark, round eyes that are set far apart.

Amstaff, if bred properly is mildly aggressive towards human beings but they can show great aggression towards other dogs. They are smart, intelligent and strong dogs who like physical and mental challenges. They are highly trainable but are stubborn. A novice owner should hire or consult a professional traine. Whereas, an experienced owner can handle them just fine as long as they are a confident leader.

In the mid-1800s, Staffordshire was brought to America and crossed with the now-extinct English White Terrier and a larger and strong American Staffordshire Terrier was developed. They were bred to excel in blood sports and expect to fight one another or with bear or bulls in and 19th century.

Some experts suggest that Amstaff were the mix of White English Terrier and Black-and-Tan Terrier. The well-bred Amstaff of today is more soft and gentle than his pit-fighting ancestors. The American Kennel Club officially registered Amstaff as terrier group in 1975.

American Staffordshire Terrier is actually very great with children. They can be loving and protective of children. If your child understands dogs, Amstaff can be a great playmate and companion.

They are muscular and can sometimes play rough and fall upon small children. Children have a habit of poking and pulling, therefore, their playtime with Amstaff should always be supervised.

The American Staffordshire Terriers look tougher than they actually are. They love to be around humans and are very loving and gentle towards their family.

Although they are known as a guard dog, they are friendly towards strangers and are more likely to start jumping and licking if some guests visit home. They are a great judge of people’s character and can distinguish between good and bad character people.

While Amstaff history tells us that they are a fighting dogs and are mostly engaged in fighting. However, they prefer to be with his people, no matter what activity they are doing; playing, cuddling, reading, laying under the sun or running. Therefore, they are the best companion for a family.

Amstaff is a stubborn dog and can be quite hard to train. They need a confident and experienced owner to train. A novice owner should consult with a professional trainer who understands the behavior and personality of Amstaff.

While training, he should be kept on a leash so that you can make him focused on you when he tries to disobey you. Don’t be harsh on Amstaff as they might show their aggression and will not obey you any further.

Amstaff is a healthy breed and is not possibly prone to any serious diseases. However, we cannot say that they will not suffer from any health condition throughout their lives. Some of the health problems they might face are skin and coat allergies, dental problems, urinary tract infections.

Other canine health problems are that they are likely to suffer are hip dysplasia, cardiac disease, heart disease, and hypothyroidism. To avoid any health problem, you should provide time to time check-up for your Amstaff.

Amstaff has a short and smooth coat which comes in a variety of colors. The c including blue, brown, fawn, black, red and white marking can be seen in combination with these colors.

Amstaff puppies are cute and adorable. They are playful and quick at learning things as a puppy. Therefore a proper training and guidance should be provided at this time to your Amstaff puppy.

The average cost of the American Staffordshire Terrier is $800-$1000 USD but if you adopt Amstaff, it will be much cheaper than buying.

Which Dog Breed are They Similar To?

Visit Doglime for more information about dogs training and their behavior.