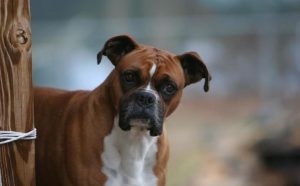 With strong and furious looks of the Boxer, many people get frightened from far away seeing them. But, the Boxers are reputed for their playful and loving personality.

Thinking of adding this playful yet fierce dogs in your family, then here are something you need to about their history, where did they came from and their behavior before making him a member.

The Boxers were originated in Germany in the 19th century. It is believed that they were the descendants of Bullenbeisser, Mastiff and even Bulldog.

The early past of the Boxers was not pleasant to hear. They were used for bull-baiting which is a horrific game that involved killing the bull and torturing them for entertainment . But in the year 1835, bull baiting was banned.

After the sport became extinct, Boxers started their different role as a working dog. They were used as butcher’s helpers controlling cattle in slaughterhouses in Germany.

By the end of World War I, the breed rose to fame and became the most popular breed in America. In the year 1904, Boxers were officially recognized by the American Kennel Club. Their popularity has skyrocketed ever since.

At first, you might assume the boxer dog as an aggressive breed just by their appearance. But if you take a second look, you will see their adorable eyes and will get self-manipulated.

Once they get comfortable with someone, they will make a great companion and are also nicknamed as “Peter Pan” because of their protective yet sincere personalities. However, due to their independent nature, they may become hard-headed at times and difficult to tame.

Before talking about their temperament, not all the Boxers behave the same way. The temperament varies from factor to factor depending on how you raise them. However, it is also different in male and female boxers. Male Boxers tend to get comfortable in a short time whereas, female boxers are more reserved and tend to be more protective towards their loved ones.

Being an intelligent breed, they are able to differentiate between the wrong and the right. If they feel their loved ones are being harmed, then don’t worry! as their muscular body and ferocious bark will save you from any trouble. You are always safe when you have a Boxer in your house.

Boxer love being challenged and if they feel bored and not being challenged they will find something else to do to entertain themselves. However, if they are not trained at an early stage, they will become an alpha dog and will see them as the leader of the family.

Boxers are very friendly and gentle with children. If you have a family with children, then Boxers can be the best playmate for your youngsters being calm and protective.

Both children and dogs should be kept under supervision when they’re together. They might hurt them unintentionally since they are big and strong.

Training should be consistent as well as leadership should be shown confidently as they will take no time to dominate if given even the slightest bit of leeway. Since their heritage is a working dog, they have a strong mind of their own which makes them hard to train. They will simply ignore your commands when they do feel like doing it. However, training methods such as encouragement, treats may help you. Harsh tone, punishments, and discipline should be avoided.

Boxers are the one dog breed having a high tendency to suffer from cancer. Besides that, some major health issues they suffer from are Hypothyroidism, Corneal Dystrophy, Demodectic Mange, Allergies, Bloat, and Deafness.

A boxer will give birth to an average of 5-7 puppies at a time. If you’re planning to get a boxer puppy then it will cost you between $700-$1,500 to buy from a reputable breeder.

Which Dog Breeds Are Boxer Similar To?

Lastly, adding this muscular yet lovable dog in your family won’t disappoint you are they are friendly and clownish. They mature slowly and will behave like a puppy until a year or two.