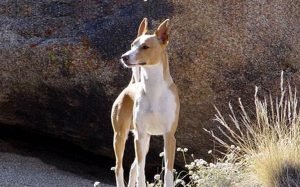 Portuguese Podengos resembles the Ibizan Hound, Pharaoh Hound, and Cirneco dell’ Etna and it is believed that all these breeds share the same ancestry. Portuguese Podengos have a large, erect, triangular ears and the head is Pyramid-shaped. The eyes are expressive almond-shaped which comes in honey or brown colors. It has a slender, rectangular body which is strong and well-muscled.

The Portuguese Podengos were believed to be used as a multi-purpose hunting dog by Phoenician of Africa in 600 BC and the Phoenician traders distributed it in Portugal in 700 BC.

Portuguese Podengos were recognized in Europe by Federation Cynologique Internationale. The American Kennel Club has registered this breed in Miscellaneous Class since 2014 (as of March 2019) which is the last step to fully recognization. However, Portuguese Podengos Pequeno is still considered as a separate breed.

Portuguese Podengos are very loving and affectionate towards children which makes them child-friendly. They are protective of children and are always alert around them. They love to be with them and play with them.

Temperament: Portuguese Podengos has a sweet and loving temperament towards its family. They are affectionate and very protective of family. They to bark to an odd sound or any strange person, which make them a great watchdog. Portuguese are aloof of strangers and do not trust them easily. A proper introduction is necessary if any guest is visiting the house.

Behavior: Portuguese Podengos has a chewing habit, if not trained properly at an early age, it can be hard when they grow up. They are not an excessive barker but they have a high pitched voice as a hunting dog. So, they sometimes to make a high pitched sound while at home sitting.

Personality: Portuguese Podengos haves independent and alert personality. They are highly alert of the things going on in the surrounding and watch each and every action carefully. Therefore, they are considered as an excellent watchdog. They are independent but are very loving and caring for their family members, especially children.

Training Portuguese Podengos is not for a novice or a first-time dog owner. They are a very independent dog who only responds to a confident and consistent training. Therefore, the owner should be an experienced dog owner and should be patient with them.

Train them with gentleness and reward them with treats and praises as they complete a certain task. The first training that should be given to them is proper socialization with a variety of people because they do not adapt well with new people.

The average life span of Portuguese Podengos is between 10-15 years. In these years, they might suffer from a few canine diseases which are explained below:

Portuguese Podengos come in different colors and markings which is listed below: