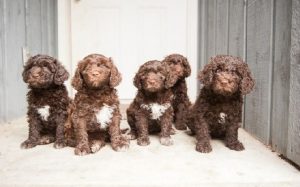 Barbet is a medium-sized dog breed that was originated in France. It was used as a gun dog that was a keen hunter and tireless swimmer. It is an energetic dog that is suited in an open place where they can wander around playing and doing their regular activities. They do not do well in an apartment where they cannot roam around and perform their activities.

Barbet can give birth to 4-6 puppies at a time. To help your Barbet puppy grow in a healthy adult, you need to be aware it developmental stages in different weeks. So, in this article, you will learn about the behavior and needs of the puppy during different weeks.

At the time of birth, your Barbet puppies are completely deaf, blind, and unable to walk. They cannot see the beautiful world around them and neither can they hear anything. However, they experience the world around them, their other littermates and their mother with touch and smell. They rely on their mother for the heat and warmness by piling all against her body.

At this stage, they are not even able to defecate or urinate by themselves. So, the mother will lick their belly which stimulates them and leads to defecate. As soon as they are born, the mother licks off their babies and makes them clean which is the first gentle pat that the puppies experience.

The mother needs to be kept in a cozy place where she can provide enough warmness for her litters. The newborn puppy separated from its mother can quickly die of hypothermia.

The second stage of the Barbet puppies is a neonatal stage which is after birth. For the first few weeks, the puppy should only feed its mother milk. The mother’s milk contains colostrum which is a great source of antibodies that protects the baby from all kinds of possible diseases that they might face at that stage. Through their scent ability, they find the mother’s scent marked breast and reach there by crawling.

In this stage, the puppy needs a lot of sleep which is about 90% a day. It is best for them to take a good amount of sleep for the first two weeks as this energy will contribute to their growing and development. After two weeks you will see that their weight has doubled.

This is a very important stage of your Barbet puppies like any other puppies. After the second week, they slowly begin to open their eyes and slowly start to hear the sound around them. They will start developing their own vocabulary to communicate with their littermates and their mother by yelping, whining, and barking. In week two, they slowly start standing on their feet and by day 21, they start taking their first unsteady walk.

They start to play with their littermates and sampling food from their mother’s bowl. In this transitional stage, they become more independent compared to there first two weeks of birth.

The socialization stage is one of the most important parts of the Barbet puppy. It is a very critical stage because, in this period, they began to form an attachment with human and canine. So, it is necessary to guide and supervise their interaction. They start accepting anyone as part of their family. Therefore introduction to other humans and canine should be done carefully.

This is the stage when the milk production of the mother begins to slow down and puppies start to eat solid food slowly. Provide them with a complete balanced diet and good supplements. Start leash training at this period and slowly introduce them to the outside world.

The stage after the socialization period is called the juvenile stage where they are more active and mature. You get to see the many sides of their personality where they are stubborn, curious, enthusiastic, naughty, and affectionate. This is the best time to train some basic obedience training which must be done by using positive reinforcement.

They learn more about canine life and are involved in play more than any other activity. They are energetic and very eager to learn new canine things. At this time they learn canine behavior like running, chasing, fighting, biting, pawing, barking and a lot more.

Your Barbet puppy reaches adulthood at the age of 8-12 months. They are still emotionally immature but are more mature sexually. In the 10th months, the testosterone level of the male Barbet increased by 5-7 times higher and gradually falls at the age of 18th months. The female puppy starts to go into heat at 5-6 months.

This is the stage where they are ready to mate at 12-16 months. A good amount of physical exercise is very important in this period so that they are physically developed and are healthy. Enroll them in agility and often take out for running and playing in the park.