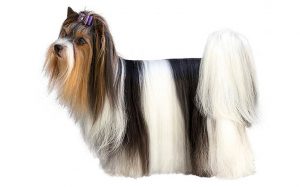 The Biewer Terrier is a small-sized, elegant toy dog breed which is also known as Biewer a la Pom Pon and Biewer Yorkshire Terrier. It is a small, playful and adorable dog that gets along with both children and other pets very well.

They have a loving and charming personality which makes them an excellent family companion. Anyone who wants a small dog with a big playful personality, Biewer Terrier is for you.

The Biewer Terrier looks very much similar to Yorkshire Terrier but is a different breed. It is a little, elegant with the unique tri-colored coat also known for its signature ponytail.

The coat is long, silky, floating close to the ground. The coat is straight with no undercoat that is usually trimmed for easiness in movements. They have round eyes which have a bright and intelligent expression.

In 1984, a female puppy was born with blue, white, and gold color, which at that time had no particolored. The puppy was named Schneeflocken von Friedheck, that became the starter of the Biewer Terrier.

The first Biewer Terrier (Schneeflocken von Friedheck) was sold to a German woman.

In 1986, the Allgemeiner Club der Hundefreunde Deutschland (ACH) of Germany recognized it as the Biewer Terrier. The American Kennel Club has recorded it in the Foundation Stock Service since 2014 (as of 2019, April).

Biewer Terrier gets well with children of all age as it is a playful, energetic, and loving dog. However, it is best suited in a house with older children who know how to handle and behave around the dog.

Small children can be rough and may hurt them as they are small. Therefore, if you consider keeping a Biewer Terrier in a house with small children, close supervision is needed.

Temperament: The Biewer Terrier has an energetic, intelligent, and loyal temperament. They love to be with their people most of the time either sitting on their lap or playing with them. They are known to be wary of strangers, so will warn you if some stranger is approaching by barking. Therefore, they can be seen as a watchdog too.

Behavior: Although Biewer Terrier is a tiny dog, they have a very loud bark. It can make them a great watchdog but will also disturb the neighbor. Therefore, it is important to teach your Biewer Terrier to stop when command.

Personality: The Biewer Terrier is a small dog with a big personality. They thrive for attention and will do anything to get that attention. They are a fearless dog who can stand against anything much bigger than its size. So, they should be kept on a leash while taking out to avoid any kind of aggression.

Training Biewer Terrier is a tough task to do as they have a mind of their own and does not like being said what to do and what not to do. To train them, first, you have to establish a firm and consistent leadership upon them. Once they see you as a leader, they will start to follow your command.

Use positive methods of training by rewarding them with treats and lots of vocal praises. This will motivate them in training.

The Biewer Terrier is generally a healthy breed with a life expectancy of around 16 years. However, in those years, they can face some possible canine diseases that are briefly explained below:

The Biewer Terrier comes in the following colors according to the American Kennel Club:

Height and Size: The average height of the Biewer Terrier is between 7-11 inches and the average weight is between 4-8 pounds.

Cost: The average cost of the Biewer Terrier puppy is between $1200-$1500 USD. For a well-bred puppy, it can cost higher than the average price.