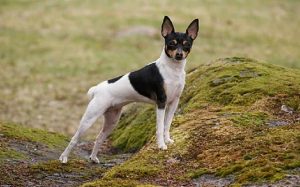 The Toy Fox Terrier is a smaller version of their ancestor, Smooth Fox Terrier. It is a terrier dog having a toy personality. It has been used for various tasks, from keeping farms and house free from rats and vermin to circus dog. They are even considered as a lap dog that can make a great companion for a family.

The Toy Fox Terrier has a lithe muscular body that has great stamina and also strength. The head is elegant with an expressive dark and bright, round eyes. Their ears are V-shaped erect, pointed upwards and set high close on the head. The coat is shiny, fine, and smooth to touch.

The origin of the Toy Fox Terrier is in the United States. It was originally bred to clear rats and vermin from the farm. It was bred by crossing Smooth Fox Terrier litter runts with toy dogs like Chihuahuas and the Italian Greyhounds.

The breeders wanted a dog that possesses the terrier personality, but with a beguiling toy-breed personality. While at first, they began as ratters, they soon were taken for a show dog due to their cleverness and grace which made them a great circus trick dogs.

The Toy Fox Terrier is a very active and energetic dog that makes a great playmate for older children. However, small children interaction should be supervised, as the Toy Fox Terrier high energy level is not suited for small kids. Teach your children to interact with dogs as their rough handling can hurt this small-sized Toy Fox Terrier.

Temperament: The Toy Fox Terrier has a friendly and alert temperament. It is a very energetic dog that makes a great family companion. They are an excellent watchdog as they are alert every time and will warn you of someone approach. They bond deeply with their people and want to be involved in every family activities.

Behavior: The Toy Fox Terrier is an excessive barker that can disturb your neighbor. They might bark at the sight of an object moving or just because they are bored. Therefore, train your dog to stop whenever command so.

Personality: The personality of the Toy Fox Terrier is intelligent, loyal, and protective. They are very attached to their family and their instinct to protect them comes naturally. They are not afraid to stand if someone tries to threaten them.

Training Toy Fox Terrier is easy as they are highly intelligent and are quick at catching different commands. Treat them gently and do not correct them physically as they will mistrust you. Motivate them by rewarding them with delicious treats and a lot of vocal praises.

Train them in a fun way by including dog games like tricks and fetching. Once basic training is completed and your Toy Fox Terrier has mastered it, jump it to advance training like agility.

The Toy Fox Terrier is generally a healthy breed with a life expectancy of 13-15 years. During these years they might have the possibility to suffer from following canine diseases:

The Toy Fox Terrier comes in following colors according to the American Kennel Club:

Height and Size: The average height of the Toy Fox Terrier is between 8.5-11.5 inches and the average weight is between 3.5-7 pounds.