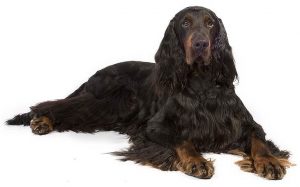 Gordon Setter Dog is a large-sized dog who is the heaviest of the Setter breeds. They are well-muscled and tends to work hard but also are very playful and makes a great family companion. They need a lot of physical activity to keep them fit and healthy.

Gordon Setter Dog has a powerful appearance with its tall and well-muscled body. Their chest is deep and not too broad at front. The head is long with oval-shaped deep brown eyes and ears are long, set low on the head. The coat is from medium to long which is either straight or light wavy.

Gordon Setter was originated in the early 17th century in Scotland by the Fourth Duke of Gordon. They were bred to be a bird dog who used to hunt. The hunter would shoot at the birds like pheasant and quail and the Gordon Setter would bring the bird to the hunters.

The American Kennel Club recognized Gordon Setter in 1892 under the Sporting Group.

Gordon Setter gets well with children as they are tolerant and loving towards them. They are extremely protective of them and love to play with them. However, rough handling can make them go away so, children should be taught to approach them and taught some manner.

Temperament: The temperament of Gordon Setter is affectionate and confident. They are very loyal and devoted to the member of the family and forms a strong attachment with one person. They are wary of strangers and do not trust them easily. However, if socialized and introduced properly, they are nice and gentle towards guests.

Behavior: Gordon Setter is a little jealous dog who doesn’t like to share the affection and attention he is getting to any other pet. So, it is better to keep Gordon Setter as an only pet and let other pet in the house if they are to be raised together from puppy-hood.

Personality: The Personality of Gordon Setter is bold and powerful. They love their family and are very protective of them. They are of serious nature but also can be fun and playful who wants to be included in family activities. Their reserved nature around strangers and aggressive towards other dog makes him a good watch and guard dog.

Gordon Setter training can be difficult as they have a mind of their own and do not like to be told what to do or not to. Therefore, the leader should be steady and strong who can show him who the master is. Positive reinforcement like rewarding with treats and vocal praise would help in training Gordon Setter a lot. They should be enrolled in obedience training and agility training to keep their mind active.

Gordon Setter is generally a healthy breed who have the possibility of suffering from hereditary health problems. Besides genetic health condition, they may also some time in their life face some canine diseases, which are given below.

Cost: The average cost for a Gordon Setter puppy is between $800-$1000 USD. However, adopting a puppy cost a lot lesser than buying from a breeder. Adoption usually cost around $300 inclusive of the expenses before adopting the puppy.