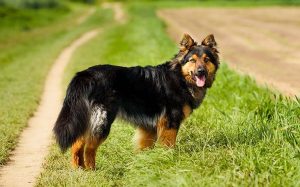 Bohemian Shepherd which is also known as Chodský Pes is a large-sized dog breed. It is a muscular, strong, powerful dog breed with an athletic body that is very much similar to the German Shepherd.

Due to its devotion, love, and loyalness, Bohemian makes an excellent family companion. It is best suited for an active family member in a house with an open space. It also does well with other pets in the family and gets along with them pretty well.

The Bohemian Shepherd was originated in the Czech Republic which was also used as a guard dog in Bohemian southern borders and homes. It was the trustworthy companion of the Chods while guarding the borders in the Southern Czech Republic.

After the World War, it was almost forgotten and lost but Dr. Vilem Kurz and Mr. Jan Findejs recovered this breed in 1984.

The FCI has provisionally recognized the Bohemian Shepherd since 2019. The American Kennel Club has registered it under Foundation Stock Service and yet to be fully recognized.

Temperament: The temperament of the Bohemian Shepherd is calm, gentle, loyal, and devoted. Although they are a big dog who gives a vicious impression, at first sight, they are well known as a calm and gentle breed. They are very devoted to their family which makes an excellent family companion.

Behavior: Bohemian Shepherd is a very active working dog that was bred as a versatile working dog. They need regular vigorous exercise and if they do not get that, they tend to become destructive and depressed. So involve them in household work as well in physical activities like sports, running, and playing.

Personality: The personality of the Bohemian Shepherd is intelligent, courageous, alert. They are likely to make a sound whenever they hear some noise in the surroundings or when someone is crossing their territory. Although they are not likely to bite or get aggressive, they will bark and warn their owners.

Bohemian Shepherd is a highly trainable dog that can only be trained by an experienced dog owner. They tend to respond well to a positive method of training, so reward them with lots of vocal praises, treats, and a gentle pat on the back.

Once they master the obedience training, enroll them in agility. Never be harsh on them or use force hands on them.

Bohemian Shepherd gets along with children very well as they are very loving, affectionate, and gentle with kids. Due to their energetic and playful nature, they make a great playmate for children.

Although they are a friendly dog, their interaction with kids should always be supervised so there is no hurt or misbehavior from either party.

The Bohemian comes in the following colors and markings:

Cost: The average cost of the Bohemian Shepherd puppy is between $700-$900 USD.

Height: The average height of the Bohemian Shepherd is between 19-21.5 inches

Weight: The average weight of the Bohemian Shepherd is between 37-60 pounds.