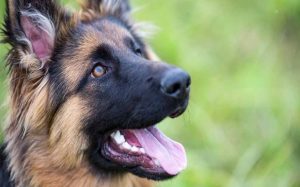 The large guard dog, often known as ‘One man breed’ is none other than a German Shepherd. German Shepherd is famous for having reputations like loyalty, courage, and sweet nature. They are dogs who can work all day long which makes them well-known workaholics.

With their extreme loyalty and sweet nature, they are the second most popular dogs in America after the Labrador Retriever. They are brilliant canines with an aptitude for love, knowledge, and stimulation.

German Shepherd was originated in Germany back in the early 19th century when a German cavalry captain decided to ‘breed one of the most dexterous herding dogs in the world’. However many would not agree with the description but he succeeded in breeding the most well-rounded dogs.

Traveling through various regions for the perfect dog to combine, Von Stephanitz, started attending different dog shows. Finally, a wolf-like dog caught his eye and adopted it to create a perfect descendant. Which he surely did!

As Germany was moving towards industrialization, Von found it more reasonable that his breed can perform military and police services too. Being part of the military, he succeeded to convince the German government to use the dog in various tasks. Shortly after, the dogs were used as rescuers, carriers, guards, and messengers during World War I.

The German Shepherds were immediately prized for their astounding intelligence, athleticism, keenness. If trained properly, they were strong enough to be pack dogs, understand commands, and serving as an for soldiers.

Shortly after, the breed became famous in the US. Their intelligence and fearlessness helped a lot of US soldiers to bring back home. They started serving as, military dogs, guard dogs, police dogs, therapy dogs, service dogs, and many more. When it comes to trainability, they have a stance of their own.

Are Your Child Safe With GSDs?

YES! Your child is absolutely safe with the German Shepherds. They are very gentle with the kids which makes them the best-play mate. Your pet will tolerate pokes, grabs, and occasional tail-pulling too.

Your children are full of energy and so do German Shepherds. This endless energy paired with high intelligence will be a plus point to your kids, as they can teach your pet new games and tricks which they learn very quickly.

As German Shepherds are large, they stand up to the height of 26 inches and weigh up to 90 pounds. This might be a threat for a toddler bouncing around. These gentle giants won’t hurt the children intentionally but may harm accidentally if overly exuberant.

Shepherds could get a little mouthy while teething or playing. So, it is important to avoid it by providing chew toys and putting into the crate.

The German Shepherd dogs are best known for their strong, obedient, and loyal nature. They are guard dogs and protectors. However, first and foremost they are herding dogs and make a wonderful family companion.

Their personality is marked as fearless, self-confident, and develop indiscriminate friendships. They seem aloof towards strangers however once they get friendly it will remain till life long.

GSD’s on why was the breed bred for? The German Shepherds were bred to herd . So, you can expect the traits of sheepherding such as, quick response to shepherds/masters, athleticism, or a compulsion to chase things that moves. as well as to serve in the . can provide years of loyal companionship to your family.

As they were trained as a fighter, they will need proper training and socialization in their youth to be a good family pet. They have the ‘alpha’ kind of personality which means, they will rule your or your family if they sense the lack of leadership.

German Shepherds are large, energetic, and require physical as well as a mental exercise. They thrive in their training sessions and love playing fetch with a stick, ball, and frisbee. While highly trainable they need to be socialized with different people and animals.

Some say German Shepherds shouldn’t at an early age because they are guard dogs. If socialize they will get familiar with different people and won’t understand the difference between an intruder or the people he’s acquainted with.

Facts You Need To Know About The “One-Man Breed”

The German Shepherd is undoubtedly a healthy dog living up to 9-10 years. However, it is important you get all the health information of the breed and their parents. The common health problems found in German Shepherds are given below.

These were some common health issues found in German Shepherds. As we all know, prevention is better than cure. As soon as you found something inappropriate in your pet, immediately consult your vet before it’s too late.