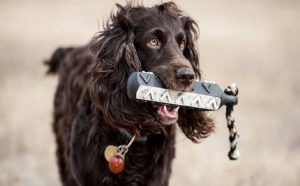 Boykin Spaniel is an adorable breed with their long curly ears to the well-balanced physique. It was bred as a hunting dog but today it has won the hearts of millions as a family pet.

If you’re planning to own a Boykin Spaniel then there are some traits you must know about them.

Boykin Spaniel originated from South Carolina in the early 20th century. They were bred to hunt waterfowl, wild turkeys and pheasants. They were often called ” The little dog that doesn’t rock the boat” because of their perfect size to fit on a boat with a hunter.

Originally Boykin Spaniel was a stray brown dog who had the knowledge of hunting birds and then were crossed with American Water Spaniels, Cockers, Springer Spaniels and Chesapeake Bay Retrievers.

Boykin Spaniels are energetic and enthusiastic dogs. He can be a wonderful partner to your kids especially if they are raised with them. However, he’s not a kind of a dog which will sit patiently with a toddler. Older children who can teach them tricks and play outdoor and knows how to approach him can be the best playmates.

You should always teach your Boykin Spaniel on how to approach the kids and not to be harsh on kids. As well as, you should also teach your child not to bother him while eating and approach in a right time.

Boykin Spaniels affectionate dogs to their family. They are protective and towards their territory. Boykin alert but are also friendly with everyone even strangers if treated with affection, which does not make them a good watchdogs.

With their hunting instincts, they love being busy and are suitable for families who are active. Boykin Spaniels are not a couch potato but thrive on participating in family activities. They are quick learners which makes training easy. However, they will start believing that he is the leader until you develop the leadership personality.

Training a Boykin Spaniel is easy as they are quick learners and thrive during training sessions. They love learning new things. However, you should be consistent with training and make him realize you’re the leader.

As with every breed, Boykin Spaniel has some health issues that can be a concern such as, heart condition known as, pulmonic stenosis, hemophilia A, and eye problems such as, distichiasis.

Which Dog Are They Similar To?

In order to live a happy life together with your furry pet, treat them with love and affection. Keep in mind that health problems and temperament are based on how you raise them.