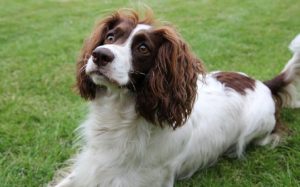 The French Spaniel is an intelligent and loving dog that makes a wonderful companion in the family. They form a strong bond with their loved ones. With a sturdy look, tall, and powerfully built, they are versatile hunting dogs.

If you want a hunting dog yet fantastic with family then the French Spaniel is probably the right breed for you. But before owning French Spaniel, you should know about its origin, behaviors, and health issues.

Like other Spaniel breeds, French Spaniel is also believed to be derived from Spanish and Portuguese hunting dogs in the 14th century. They were used to hunt wildfowl and retrieving games. King Charles Spaniel and the French Spaniel began to undergo the process of selection into distinct breeds by the mid-1600s.

While King Charles Spaniel roamed around the royal palace on the other hand French Spaniels were used as both hunters and companions in Versailles and Saint Petersburg.

Though this breed is still recognized by the Federation Cynologique Internationale, it is not still not registered in the major national kennel clubs as of 2019

Yes, French Spaniels are known to be gentle and playful with children. They are best suited for kids who can play with them and teach them new tricks. They love playing outdoors as well as spending time sitting around children.

French Spaniels are protective towards children and may follow where ever they go. However, you should teach your child how to approach the dog.

The French Spaniels are affectionate and devoted to their master. They will have plenty of time and respect for their family and are happiest when you give them enough time and training. As we all know, tired dogs are the happiest dogs.

Despite being a hunting dog, French Spaniels don’t need long and heavy exercise. They thrive outdoor as well as indoors. They are not aggressive and have even-tempered. French Spaniels are known for their well-behaved behavior.

French Spaniels will develop separation anxiety if left alone for long period. They love human counterparts as well as the company of other pets.

Their eagerness to please personality and intelligence makes them highly trainable dogs. French Spaniels have sensitive nature which means you should always treat your pet with love and affection. Otherwise, they will become stubborn and aggressive.

Health problems in this breed are rare as they are natural hunters and recovering from extinction makes them robustly healthy. However, there are some common health issues found in French Spaniels.

Epilepsy is known to be a common problem among the Spaniel breed. It is seen between the of 6 months and 5 years.

Entropian is the condition where the inward scrolling of one or both eyes is caused. This causes discomfort, recurrent infections, and potentially loss of sight.

French Spaniel is prone to suffer from ear infections because their ears produce more amount of wax and are set close to the head as a result their ears don’t get enough air making them poorly ventilated.

The French Spaniel gives birth to 3-7 puppies at a time. The average price of the puppy is $600 – $800 depending on the breeder and the quality of the breed.

French Spaniel are people-oriented dogs who will thrive when surrounded by their loved ones. Having a French Spaniel in your family is never the wrong choice.